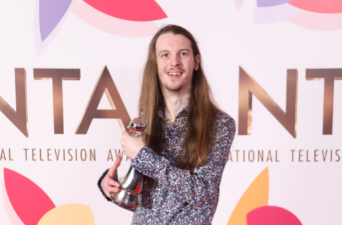 He won the Best Newcomer award

James Moore will keep his National Television Award at his mum’s house because it is “a lot tidier” than his flat.

The Emmerdale star won the Newcomer award at the NTAs on Tuesday night (22.01.19) for his role as Ryan Stocks, and he is going to give his shiny accolade to his mother to be “well looked after” because his apartment is too messy.

Speaking backstage at the National Television Awards at London’s The O2 on Tuesday night (22.01.19), James told BANG Showbiz and other media: “If they let me take the award home I might keep it at my mum’s, because I feel like my mum’s house is a lot tidier than my flat.

“I want this to be well looked after, so it will go on my mum’s mantelpiece.”

The Dales actor, who suffers from ataxic cerebral palsy, has also called for soaps and TV shows to do more for actors who are disabled.

He added: “Emmerdale and soap in general is brilliant in really raising the bar, but I think more does need to be done… casting people always are looking for ability, gender and race.

“It should be based on talent and being the right person for the role.”

James admitted his accolade means “so much more” because it was voted for by the public, and he loves portraying his character – who joined the soap as Charity Dingle’s (Emma Atkins) son in May 2018 – because he is “so diverse”.

He said: “The fact that this was voted for by the public means so much more.

“I love playing Ryan because he’s so diverse, there’s so much to him.

“I think at times he’s been a bit more self-asserting than I am.”

Were you pleased with the soap wins last night? Leave us a comment on our Facebook page @EntertainmentDailyFix and let us know what you think!