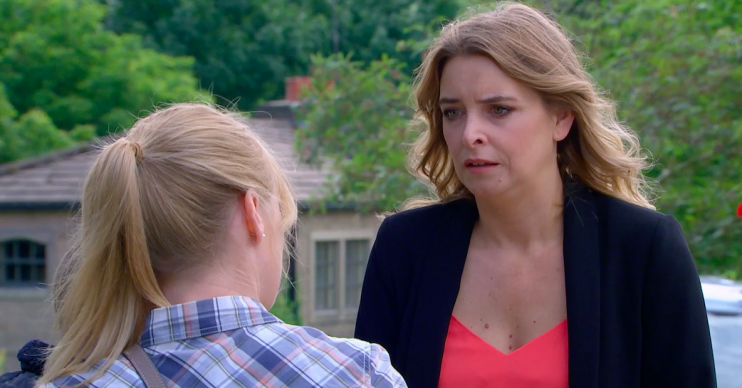 Fans of Emmerdale were howling at their TV screens last night, when Charity Dingle and Vanessa Woodfield‘s relationship hit the rocks after a tough week.

On Thursday night (August 8), Vanessa delivered a ‘”brutal” blow to her fiancée when she pushed her away – leaving some viewers fearing the pair will split.

Vanessa is grieving for her dead dad, and needs all the support she can get right now.

As the local vet has struggled to cope in the aftermath of Frank Clayton’s tragic death, Charity has been coming to terms with some family news of her own.

Daughter Debbie has decided to exit the Dales for Scotland, leaving Sarah Sugden behind.

Read more: Comedian Tommy Cannon reveals he is joining the cast of Emmerdale

Debbie decided to leave Charity her cottage, where Charity can look after the schoolgirl and give her the medical attention she needs after her recent health troubles.

Faced with the task of telling Vanessa, Charity buckled and only told her a half truth – not wanting to put more pressure on her loved one.

However, when Vanessa learned the truth from Faith Dingle, she was livid with her partner and lashed out in anger.

Appearing to make a rash decision in her wild-eyed grief, Vanessa refused to accept Charity’s apology.

Instead, turning icy-cold on her fiancée, she clutched her son Johnny tightly to her and told an upset Charity she needed to be alone “with her family”.

Fans were gutted at the shocking plot twist, with many claiming Charity IS Vanessa’s family.

One wrote: “Charity did not deserve that. She has been there for them all week. She only tried to protect Vanessa who is overreacting to what Charity did.”

Aww that was brutal!! Poor Charity 💔 but poor Vanessa too, she wont mean it!! Grief works in strange ways and we often push those closest away. They are strong & will make up x

Really #Emmerdale??? You have Vanessa break down on Rhona’s shoulder and NOT Charity’s??? And you have Ness getting upset with Charity???

A second cried: “Aww that was brutal! Poor Charity. But poor Vanessa too, she won’t mean it. Grief works in strange ways and we often push those closest away. They are strong and will make up.”

A third typed: “Got to say I didn’t expect that. It hurt quite a bit.”

“Great episode,” said another. “And Vanessa finally let go. The family line probably wasn’t the best. They are each other’s family. I hope they fix it tomorrow.”

Others said they were “broken” by the events, while many believed Vanessa had been too “harsh”.

“What are you guys doing?” blasted one more. “Don’t split Vanity up!”

Will the pair patch things up, or will Vanessa continue to push Charity away?

Do you think Charity was just trying to protect Vanessa? Leave us a comment on our Facebook page @EntertainmentDailyFix and let us know what you think!