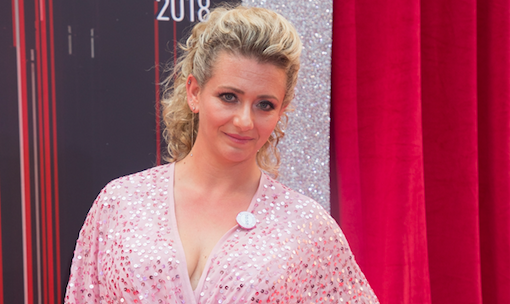 She shared her story alongside good friend Robert Rinder

In a moving speech on Thursday (July 4), the actress revealed her own mother lived a hidden life like that of Anne Frank in her famous diary.

She told a captivated audience that her family was “lucky” to have survived the ordeal.

Thank you @holocaustuk @judgerinder for including me in the most inspiring essential important conference for the ambassadors of this brilliant charity #holocausteducationaltrust. Keeping these stories spoken out loud is utterly imperative. My personal story is going to be told and my journey of discovery documented with my sister #NatalieClein early next year… but in the meantime #IAmYourWitness

Louisa, 39, spoke at a Holocaust Educational Trust conference, which invited victims of the persecution to share their stories.

Her good friend Rob Rinder – of Judge Rinder fame – was also one of the guest speakers.

As reported in The Jewish Chronicle, Louisa told those who attended that her ancestors escaped the death camps by hiding their true identities from the authorities.

Thank you @BenWeich and @JewishChron for this interview. There is so much more to be said and @KarenPollock100 and @HolocaustUK are saying and doing it. https://t.co/Eiz4uFW8x8

Louisa, who played Maya Stepney in the ITV soap, told an audience of 250 young people that her Dutch mum Channa was hidden by a non-Jewish family in the Netherlands as a baby until the age of five.

She said: “She was brought up as their child for about four or five years. She never talked about it, we knew nothing about it. I don’t even remember the moment we found out.”

She also revealed that her grandfather and grandmother were taken in by members of the resistance in Amsterdam and later reunited with her mother and aunt.

They were some of the lucky ones, however. Sadly one of Louisa’s great-aunts was sent to the Westerbork transit camp after refusing Nazi orders to wear a yellow star and later died.

Louisa relived the tale in order to bear witness to the horror of the events.

Criminal law barrister Rob Rinder, meanwhile, talked about his emotional episode of Who Do You Think You Are? in which he visited the Schlieben work camp where his grandfather was imprisoned.

The Strictly star, 41, is currently working on an upcoming BBC series on the Holocaust, which Louisa will also appear on.

After speaking about her family’s trauma, Louisa thanked the charity on social media.

Writing on her official Instagram account, she said: “Thank you @holocaustuk @judgerinder for including me in the most inspiring essential important conference for the ambassadors of this brilliant charity #holocausteducationaltrust.

“Keeping these stories spoken out loud is utterly imperative. My personal story is going to be told and my journey of discovery documented with my sister Natalie Clein early next year… but in the meantime #IAmYourWitness.”

On Twitter she added: “There is so much more to be said.”