Isabel Hodgins likes to chow down on several calorific treats to switch off after an "exhausting" day shooting hard-hitting Emmerdale scenes.

The 25-year-old actress has been "eating her feelings" after filming some traumatic episodes as her character Victoria Barton, who was recently raped and then discovered she is pregnant. 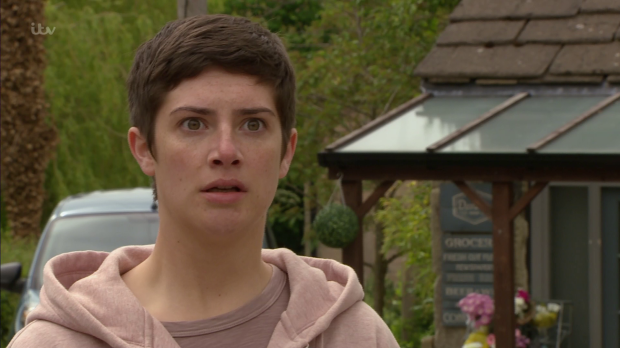 Isabel is at the centre of a difficult plot (Credit: ITV)

But Isabel tries not to take her work home with her.

She said: "I've just been eating my feelings. I get home, and I'm so exhausted because I've been crying as Victoria that I'm straight on to Deliveroo.

"Or it's a whole block of Dairy Milk, followed by three ice creams.

"It's as if I really am expecting a baby and eating for two."

Isabel has played Victoria since 2006, and admits meeting up with pals also helps her to snap out her character's emotions.

She said: "But you know, I've been here long enough to know, 'That's my work,' and all I need to do is meet up with some of my friends to snap out of it straight away. "

Upon hearing about the hard-hitting storyline, Isabel was "terrified" and worried she might "let everyone down" with her portrayal of the plot, but she has since been rewarded with a Best Actress nomination ahead of the Inside Soap Awards.

Isabel knows how to switch off after so long on the soap (Credit: Splash)

"She added to Inside Soap magazine: "I was terrified. Part of me was really excited, but a bit of me was like, 'Oh, crumbs.

"What if I let everyone down?'

"But I feel like I've proven myself, and been rewarded with a very important and poignant story."