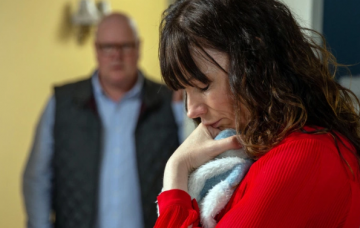 What's next for the grieving couple?

Emmerdale’s Paddy and Chas have just begun their difficult journey, following the death of their baby.

Tear-stained viewers watched as the couple said goodbye to their little daughter, Grace.

She had been born just shortly earlier, with her parents knowing they wouldn’t have long with her.

Chas had bravely decided to continue with the pregnancy despite knowing the baby had no kidneys and underdeveloped lungs.

And while this tragedy was harrowing enough, worse is to come.

Chas and Paddy will deal with their grief and trying to move forward with their lives in very different ways.

Read more: Will Joe and Debbie go through with the wedding?

Dominic Brunt, who plays the heartbroken dad, revealed to Metro.co.uk: “We knew the outcome of the birth but we didn’t want to know anymore as I like the surprise in the scripts.

“So I don’t actually don’t know what happens with Paddy and Chas next.

“I just know that they are set to struggle in their own ways for a while.”

Last night’s emotional episode featured an experimental flash-forward format, which saw Paddy and Chas enjoying special moments with their daughter as she grew.

This was shot from the perspective of Paddy, and him imaging what life could have been.

Is this a hint as to how the couple will process their grief?

Meanwhile Lucy Pargeter, who plays Chas, paid a heartfelt thanks to loyal viewers on Twitter.

“I just want to say a massive thank you to everyone who has watched tonight’s ep,” she wrote.

“I was cleaning sick up off my bedroom floor from one of the #twirls at the time, but knowing what was going on on screen I was thankful to be doing it … ‘if that makes sense’.

“I hope it was respectful of anyone who has been through anything close… and makes people hold their children close and be thankful for the gift we have been given… thank you x x x.”

Were you moved by the episode? Leave us a comment on our Facebook page @EntertainmentDailyFix and let us know.