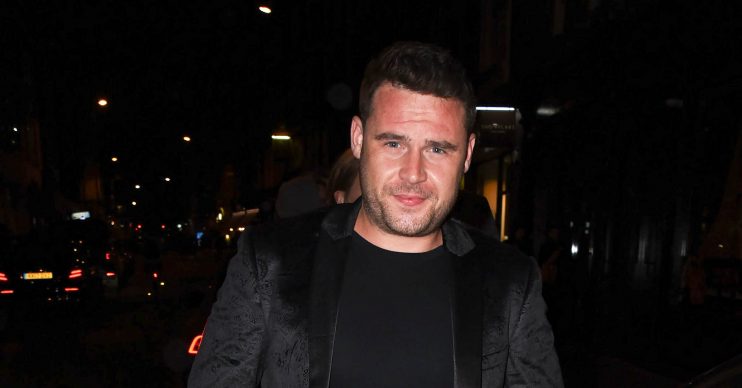 Emmerdale actor Danny Miller is taking drastic action to get rid of his “telly belly”.

The Emmerdale star, who plays Aaron Dingle, revealed he would be starting personal training.

Danny wrote on Twitter: “Starting an horrible course with @SimonMbooth to get rid of this telly belly on Monday..Which means I can eat and drink until then, right?”

Fans were quick to reassure Danny he didn’t need to do anthing.

“Honestly speaking, you look perfect as you are. But you do what’s right for you. And I’m sure Simon will make it as fun as possible haha,” wrote one.

Another added: “Good luck with it all even though you’re fine as you are.”

“You look great as you are, but good luck with the training,” agreed a third.

Aaron, who is married to Robert Sugden, was hoping to have a baby with his husband by a surrogate, but they recently put their plans on hold after Robert’s sister Victoria was raped.

After going to the police, Vic found out she was pregnant. Unfortunately the Crown Prosecution Service were unable to charge Lee due to lack of evidence and he claimed it was consensual sex.

Ever since, Robert has been out for revenge and it has been putting a strain on his relationship with Aaron.

Robert paid Dawn to get Lee interested in her, however Aaron found out about the plan and he and Robert raced to stop the attack.

Despite Victoria trying to keep her pregnancy a secret from Lee and his mother Wendy, Diane let it slip in front of them.

Since then, Lee has been terrorising Victoria and this week began demanding money and a public apology from Victoria and in return, he would give up his rights to the baby.

However, after Lee made a deal with Robert and Victoria, he continued to taunt Robert admitting he had raped Vic and would do it again to another girl, which led to Robert hitting Lee over the head and putting him in a coma.

Read More: Emmerdale fans disgusted as rapist Lee is ‘portrayed  as a victim in justifiable’ storyline

Earlier this year, it was announced Ryan Hawley was leaving the soap leaving Robron fans devastated. However, Danny has confirmed he will be staying in the Dales.