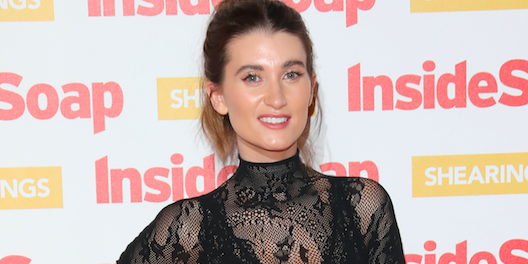 She had baby son Ace in July

Emmerdale’s Charley Webb has returned to work after the birth of her third child in July – and the project is something close to her heart.

Since then, she has been enjoying getting to know her newborn during her maternity leave from the ITV soap, and has kept a relatively low profile on social media – returning to hit back at people who criticised her sons.

However, on Wednesday (September 11), Charley shared a paid sponsorship advert with fast food chain McDonald’s on her official Instagram page.

Sharing a photo of herself with son Buster, she wrote: “AD: My favourite part of the kids’ evening routine is story time.”

She continued: “We read together every evening and love taking it in turns to do ‘all the voices’ and have a little giggle together.

“I’m really excited to announce I am partnering with @mcdonaldsuk on their new #HappyReaders campaign which launches today!

“The scheme will provide a free The World’s Worst Children book (Buster’s absolute favourite!) in every Happy Meal. Get yourself down to McDonald’s before October 15th!”

Her followers, including fellow soap actress Helen Flanagan, were quick to respond.

Helen wrote: “These look so good.”

“What a lovely picture of you and your son,” gushed another.

However, not everyone was complementary with one critic replying: “Books are great for kids… but McDonald’s is not.”

The scheme hopes to encourage children to read by offering a free story from David Walliams’ bestselling series alongside every Happy Meal.