Although Amy and Kerry thought they'd destroyed all evidence of their break-in, fans have pointed out there might still be something to put them in the frame...

Last week Amy realised she was in trouble when a woman she had stolen from in Ireland had found her and demanded her money back.

Amy explained to her mum Kerry how she got involved with an abusive man, who took out loans in her name, and ended up having to steal from a friend in order to pay back a loan shark. 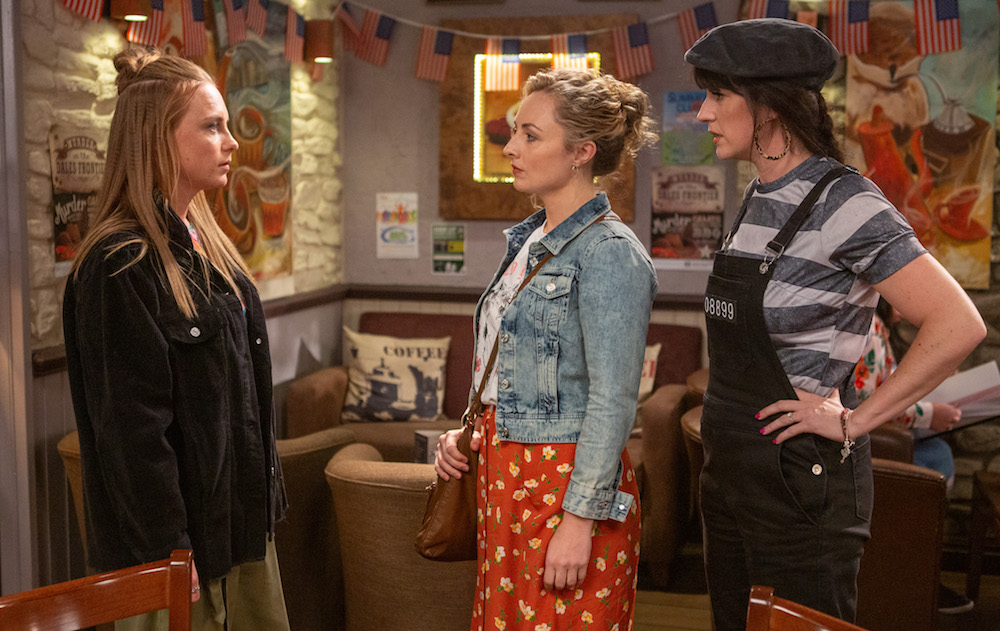 When Kerry went to leave the factory, she tampered with the fire alarm causing it to break.

When Jai revealed he couldn't get anyone out to look at the alarm till the next day, all work in the factory had to be put on hold, but whilst the place was empty, Kerry took advantage and stole the money from the safe. 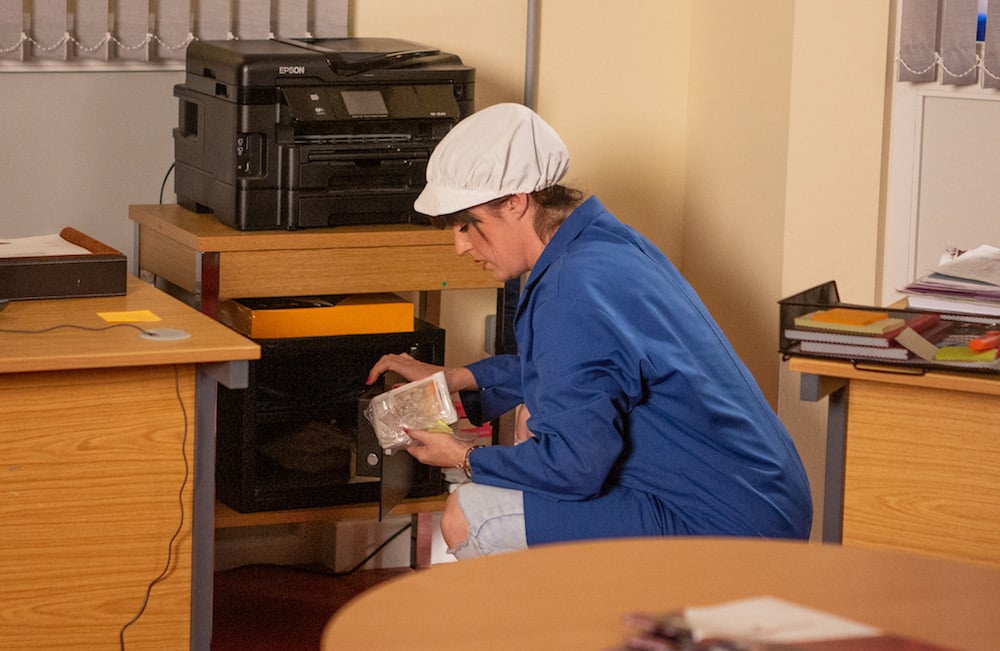 Kerry stole the money from the safe (Credit: ITV)

Kerry took the money to Amy and she wanted to return the cash but when they got back to the factory she changed her mind. Amy and Kerry destroyed the CCTV which ended up causing a fire. 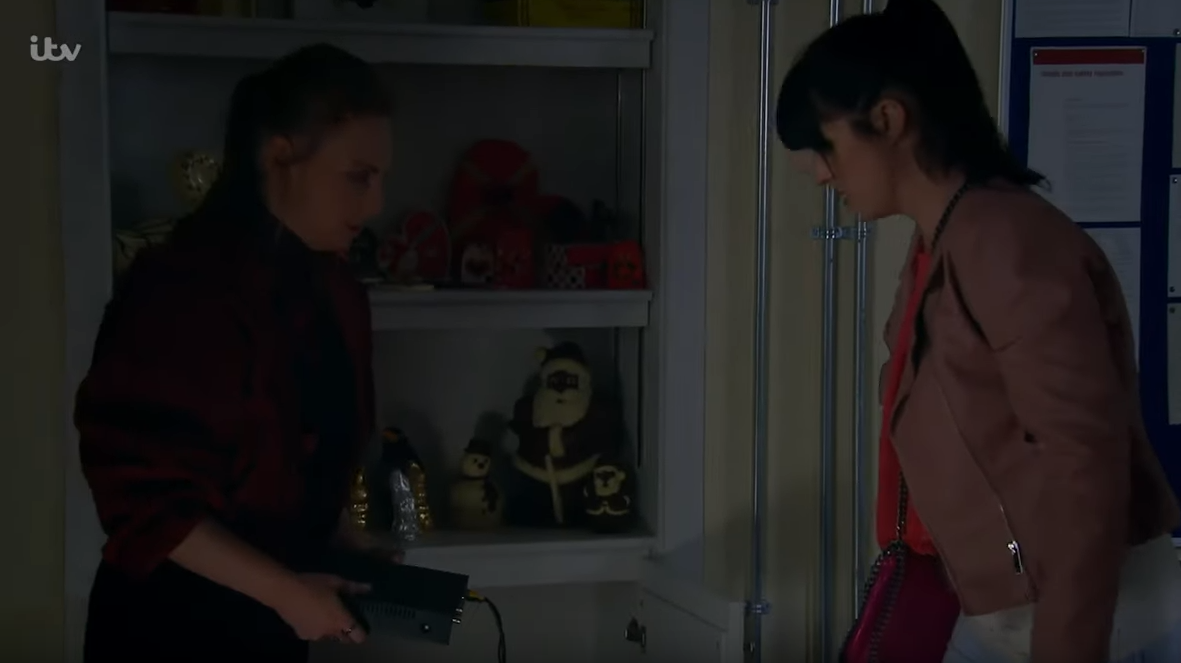 Frank Clayton went into the factory to clear out his locker, as he had been sacked that day, and soon realised a fire had started and his daughter Tracy, who was in the factory to meet Billy, was trapped in the cupboard.

He managed to get his daughter out but went back into the building to get the engagement ring he had bought for his girlfriend Megan.

As he came out of the factory an explosion went off throwing Frank against a van, killing him.

Sadly now villagers are starting to think Frank started the fire to get revenge on Jai for firing him. 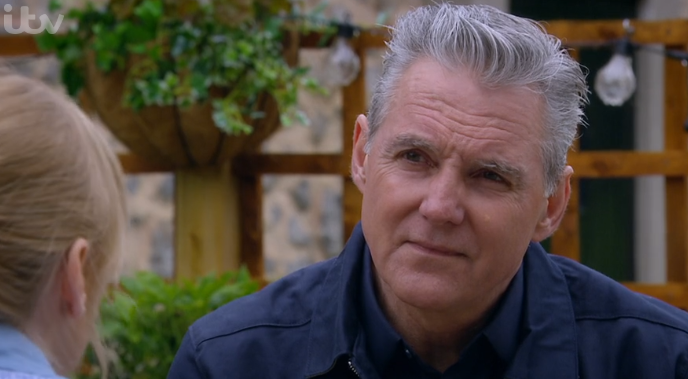 Frank was killed in the fire (Credit: ITV)

Kerry helped solidify this theory to the police when she lied to them to cover her tracks.

She then flat out accused Frank of robbing the place, messing with the CCTV and setting it on fire, knowing she and Amy were the ones responsible.

However, viewers have pointed out there could be fingerprints on the safe, proving Kerry took the money.

Run those fingerprints on the safe through the system and catch Kerry out qt, slandering Frank like that, audacity of the woman.

Run those fingerprints on the safe through the system and catch Kerry out qt, slandering Frank like that audacity of the woman! 😱#emmerdale

Y dont they dust the safe for fingerprints too.
Kerrys will b on there not franks #emmerdale

@nataliejamieson Wouldn't Amy's prints still be all over whatever she actually used to totally smash the CCTV camera? Or did that particular weapon also get destroyed in the end? #Emmerdale #FireExplosion 🔥

Others have pointed out that CCTV footage can be backed up to the cloud, which would show Kerry and Amy destroying the CCTV system.

@nataliejamieson Shouldn't the CCTV footage actually be backed up on the cloud or whatever? There must be some way of accessing it right? Even if Amy did totally smash the actual camera #Emmerdale #RIPFrank #FireExplosion 🤔

Mmm, Most people have CCTV that immediately gets backed up onto Google. Not on #Emmerdale

Let’s hope that the cctv gets backed up to the cloud, so Kerry gets what she deserves #Emmerdale

Also, Emmerdale fans have been questioning what happened to the engagement ring Frank went in to get from the factory.

They have branded Kerry 'disgusting and vile' and called for her and Amy to be axed.