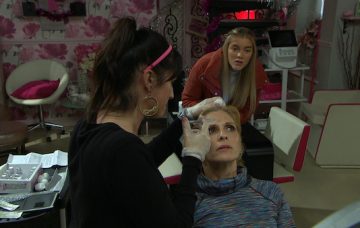 Bernice was rushed to hospital after a reaction to dodgy Botox

Emmerdale fans felt sick to their stomachs last night, when Bernice Blackstock was rushed to hospital in distressing scenes.

On Wednesday (2 January), ITV viewers saw Bernice suffering a dangerous allergic reaction to a Botox injection which could leave her paralysed for life in her face.

The shocking scenes came just a day after another distressing and bloody act, when Cain Dingle was viciously beaten up by the transphobic thugs who also attacked Matty.

Some fans were overwhelmed as an injured Cain came home from hospital, only to be replaced by a comatose Bernice…

After the New Year’s Day attack on Cain, viewers hoping for a quieter mid-week visit to the Dales were disappointed, as Kerry injected internet-bought Botox into Bernice’s forehead.

With her 50th birthday approaching, Bernice was encouraged to go under the needle by GP Liam Cavanagh’s daughter Leanna.

But, within seconds of having the first injections, Bernice’s face went red and blotchy and she began gasping for breath, saying her heart was pounding.

Noticing Bernice’s change in appearance, Leanna said: “Is it just me or is her face going red?”

Bernice looked panicked, replying: “What’s that burning sensation and why is my heart beating ten to the dozen?”

She was then seen struggling to breathe, before collapsing on the floor.

Bernice was then rushed into A&E where a doctor explained that she’d suffered an allergic reaction to the Botox.

Some fans were pleased the ITV soap was highlighting the issue, with one saying: “This Botox storyline is so current and incredibly important, highlighting the pressures of looking younger, can’t wait to see it play out! Bravo.”

Love that #Emmerdale is hitting the nail on the head with these topics recently! This Botox storyline is so current and incredibly important, highlighting the pressures of looking younger, can’t wait to see it play out! Bravo @sammeegiles @jonnymcpherson @lawrencenotrin

Poor Bernice. I’d say things escalated quickly but that reaction more than possible when allergic or really whenever messing with that stuff. Hate seeing her so insecure #emmerdale

Wtf has Bernice done? It’s better to grow old with grace than inject shite like Botox into you #Emmerdale

Another said: “Who would have thought… Cain and Bernice had me in tears tonight! Really powerful, important stories. Thank you @emmerdale @sammeegiles @HordleyJeff Great work!”

Many frustrated  viewers were annoyed with Bernice for risking her own life with Botox bought over the internet, with one saying: “When will Bernice get any sense. Surly she’s old enough to know buying Botox online is dumb #Emmerdale.”

One added: “Bernice u never buy stuff like botox online u numpty #Emmerdale.”

When will Bernice get any sense. Surly she’s old enough to know buying Botox online is dumb #Emmerdale

Actor Jonny McPherson, who plays Bernice’s boyfriend Liam on the soap, recently explained how the story will play out, saying: “Leanna is, without question, very troubled. But through the Botox story, it comes to light that the reason Leanna is so troubled is that her mum – Dr Cavanagh’s first wife – died of an anaphylactic shock.

“So this will bring stuff back for Leanna as well. You discover more about Leanna and why she behaves the way she does. She’s not just pure evil.”

Viewers will have to tune in over the coming days to see if Bernice recovers properly.

Can you find sympathy for Bernice’s desire to have Botox? Leave us a comment on our Facebook page @EntertainmentDailyFix and let us know what you think!