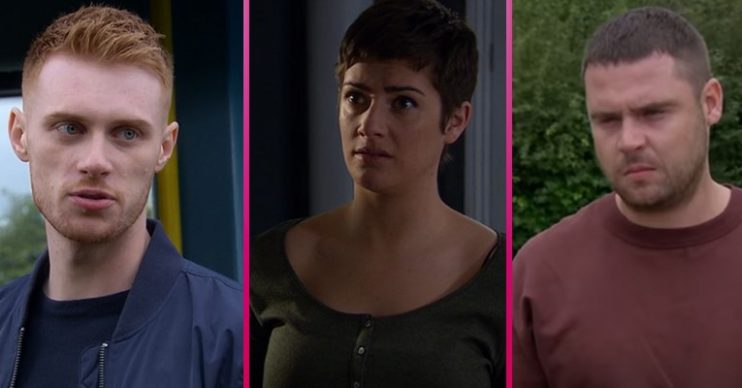 Victoria met Luke before she knew he was related to Lee

Viewers of Emmerdale have predicted a love triangle between Luke Posner, Victoria Sugden and Aaron Dingle.

Fans of the soap know that Luke came into the show a couple of months ago and struck up a friendship with pregnant Victoria.

However in a twist it was revealed that Luke is the brother of Victoria’s rapist Lee, who is the biological father of her unborn child.

Victoria’s family were at loggerheads with Lee and his mum Wendy for months.

After discovering Victoria’s accusations, Wendy called Victoria a liar and has made it clear she doesn’t believe her son was capable of raping someone.

The feud went further when Victoria’s brother Robert attacked Lee and ended up killing him.

Despite being Lee’s brother, Luke has told Victoria and his mum that he doesn’t think Victoria is lying about Lee raping her.

Aaron and Luke are gonna end up sleeping together aren’t they?

But this week, Wendy has left Victoria unsettled by moving onto the same street as her.

Obviously her new living arrangements haven’t gone down well with Aaron, who previously beat up Luke when he saw he was with Victoria in The Woolpack a few weeks ago.

Despite Luke and Aaron’s obvious dislike for each other, viewers think there could be romantic spark between them.

Aaron and Luke are gonna end up sleeping together aren’t they? #emmerdale

With Aaron recently becoming single after husband Robert sent him divorce papers, could we see a romance between him and Luke?

Do you think there will be a love triangle between Luke, Victoria and Aaron? Leave us a comment on our Facebook page @EntertainmentDailyFix and let us know what you think!