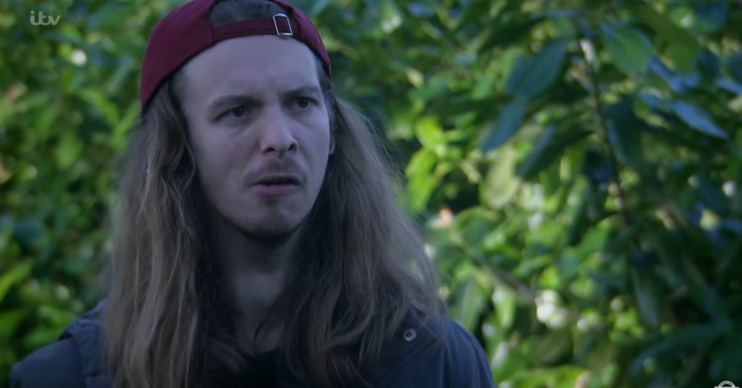 Ryan was a victim of Graham's last night

Viewers of Emmerdale have praised actor James Moore after his character Ryan Stocks ‘broke their hearts’ in emotional scenes.

Over the last two weeks, Ryan has been putting money from Kim Tate’s account into Graham’s, in return for a 10% cut for himself and his brother Noah.

But in last night’s episode, Ryan refused to transfer any more money as he worried Kim would start to suspect something.

Graham forced Ryan to make the transfer, but instead of letting him go, he picked up the IT genius and locked him in a hut in the woods, fearing Ryan would tell Kim the truth.

Ryan was later found by his mum Charity, who was due to get married that day.

But Ryan was visibly upset by what had happened.

He told his mum about what he and Graham had been up to and Charity asked how Graham got him in the hut.

Ryan, who has cerebral palsy, told her: “He picked me up. Like I was a child. And I couldn’t do anything.”

Can we just salute James Moore for tonight’s performance.

As he broke down in tears, he continued: “I couldn’t stop him.”

Charity tried to comfort her son but he said: “I felt useless. He treated me like I was nothing.”

Charity told her son how much she cared about him and how wonderful he is but Ryan said: “But he made me feel like what I am.”

The pub owner then told her son there’s no shame in having a disability and whilst Ryan said he knew that, he was upset because no matter how hard he tried, he couldn’t get out of the hut.

Ryan then broke down to his mum, saying how much he hated Graham for how he made him feel.

Viewers have praised James for his performance,.

My heart is breaking for Ryan @jamesmooreactor 💔 as much as I love Graham…. don’t hurt Ryan‼️🙏🏼 #Emmerdale

Wow, what great performances from James Moore @jamesmooreactor on #Emmerdale! Once #CharityDingle finds out that you messed with her kin, then watch your back #GrahamFoster! @emmerdale I hope James Moore will get nominated for an award for tonight’s episode #WhoKilledGraham

Later Charity confronted Graham and that night in the woods, Graham was killed and pushed off a bridge.

Ryan and Charity were soon seen meeting up, where she told her son: “no regrets Ryan.”

Did they kill Graham?