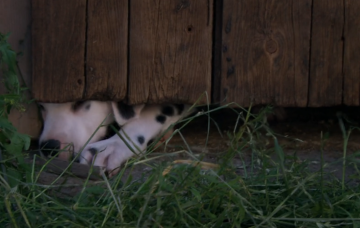 Emmerdale fans were overwhelmed with emotion as the Dingles encountered distressed dogs in a puppy farm during last nights episode of the ITV soap.

The shocking discovery was made as Zak Dingle, Sam Dingle and Lydia Hart as they tried to rescue Monty the dog from his abusive owner.

Having tracked flea-ridden and starving Monty – tied up with rope – down to a farm, the Dingles looked to have accomplished their mission of mercy.

But they were soon distracted by the sound of whimpering – and quickly noticed pooches struggling to escape the barn.

And after Lydia freed one by opening the barn’s door, it became clear Monty’s owner was a puppy farmer.

Noting the next shed along also contained scores of wailing pups, Sam said: “There’s more here. Dalmatians, hundreds of them.”

“One hundred and one,” Lydia quipped.

Fans were as stunned as Zak by the find, expressing their upset on social media.

The Emmerdale sad dogs story is too much. Hormones are hard. pic.twitter.com/3NlpmEsbyF

Aw I can’t be doing with animal cruelty now 😥 #Emmerdale

#emmerdale getting me in the heart tonight. 🐾🐶 Save ‘em all Zach!

Hate the #Emmerdale story line about the dogs being treated awfully e.g a puppy farm. It is making me not want to watch the show!

Others, however, praised the show for addressing the issue of puppy farming.

Well done #Emmerdale for the #puppyfarm story. Distressing yes, but if this awareness moves to end this, then well worth it. It is not just a soap shock story, it is happening now, it happened to my 2 dogs #adoptdontshop @emmerdale @pupaid @EmmerdalePress @SchnauzerfestUK pic.twitter.com/RaIqG9k7ui

Much as I take the mick, big up @Emmerdale for highlighting the mistreatment of #dogs. A massive problem that needs attention @DogsTrust

Zak’s reunion with Monty was sadly only a brief one as he wasn’t allowed to take Monty back to Wishing Well Cottage.

Having notified the police, the pups and Monty were all taken away from the breeder for new lives.

Were you upset by Monty and the Dalmatian’s plight? Let us know what you think by leaving us a comment on our Facebook page @EntertainmentDailyFix!