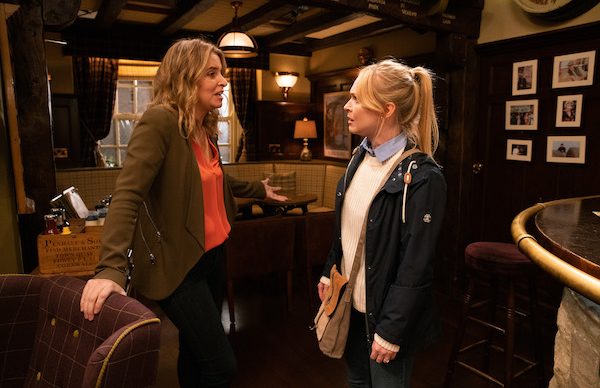 It looks like this is the end of Vanity!

Viewers of Emmerdale have been left heartbroken after Vanessa Woodfield ended her relationship with Charity Dingle.

For months, Charity has been hiding the fact she was involved in Mandy and Vinny’s casino scam.

Mandy previously  told her family how she came to owe Terry the casino owner thousands of pounds but kept Charity’s identity hidden as she played the role of ‘Red’.

‘Red’ used an earpiece whilst Vinny counted the cards and told her what to do, but Terry found out Mandy was behind the scam.

Last week, when Vanessa returned she was shocked that Charity planned on buying her father, Frank’s old house.

After Charity swore the money she had was from hard work and wasn’t at all dodgy, the pair agreed to buy the house together.

But Vinny soon ruined their plans and kept hinting to Vanessa that Charity was involved in a scam.

Later when Vanessa discovered Vinny rummaging through Charity’s things to get the money back, he told her the truth.

In last night’s episode of the soap (November 11 2019), Vanessa gave Charity the chance to come clean, but she didn’t.

Furious with her fiancée for lying, Vanessa broke off their engagement, ending their relationship, as well as outing Charity’s involvement in the scam to the rest of the Dingles.

guys i’m not ok. that was honestly soul destroying but the acting👌 but it’s so sad😭 vanessa’s little face😭 please don’t let this be the end. 😭🙏 #vanity #emmerdale @emmerdale

But im so glad it happened this way.. they'll come back together even stronger and I'm so glad Vanessa spoke her mind#emmerdale #vanity pic.twitter.com/e2OzgxsWhk

Are you sad Vanessa and Charity have split up? Leave us a comment on our Facebook page @EntertainmentDailyFix and let us know what you think!