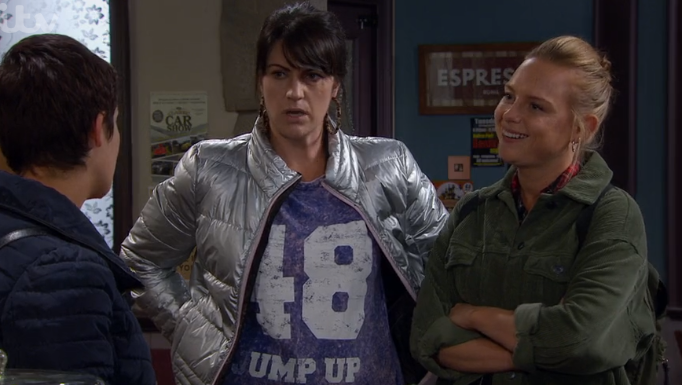 Tracy, Vanessa and Charity all know they started the fire that killed Frank

Viewers of Emmerdale are sickened that Kerry and Amy Wyatt have been continuing life as normal after a dramatic couple of weeks.

Back in August, Kerry and Amy accidentally started the fire at the Sharma & Sharma factory.

The blaze resulted in the death of Tracy and Vanessa’s dad Frank Clayton.

However, because Frank previously worked for the factory and had been sacked the day the fire broke out, villagers began to believe he was the one who started it to get revenge on Jai.

After the fire, Kerry and Amy tried to keep what they had done a secret but a couple of weeks ago, Tracy began to question Kerry when she found her passport and unused flight tickets in her bedroom.

Kerry confessed to what she had done but tried to keep Amy’s name out of it.

However when Kerry and Amy locked Tracy in Tug Ghyll cottage to stop her going to the police, she escaped and ended up knocking over Kerry.

Kerry fell, hitting her head on a rock and was taken to hospital.

When Kerry was unconscious, Amy threatened to tell the police how Kerry really sustained her injuries if Tracy went to the police about the fire.

Read More: Emmerdale viewers ‘sobbing’ as Robert and Aaron leave the village to go on the run

Sick of hearing everyone sing Kerry’s praises, Tracy decided to hand Kerry and Amy into the police and visited her in hospital to tell her the news.

Amy and Kerry in the pub like they’ve done nothing.

But when she heard teenager Amelia talk about how she was scared of losing Kerry, who is the closest person to a mum she’s got, Tracy changed her mind and decided not to go to the police.

Her decision not to hand in the mother and daughter infuriated Vanessa who confronted Kerry, but she ended up getting arrested herself for assaulting a nurse.

However, in last night’s episode (October 15 2019) Kerry and Amy were in the cafe and didn’t appear to be talking about the events over the past few weeks.

Viewers were left disgusted at how they went about in village as if nothing happened.

https://t.co/u3xabkiQoB sorry #Emmerdale producers/writers but amy and her dreadful mother laughing and acting as normal and getting away with killing frank,is just wrong,Yet another soap innocents go to jail,guilty walk free.

Amy & Kerry in the pub like they’ve done nothing. #emmerdale

Kerry has no shame #Emmerdale

It is kind of weird how Amy's just living her life as normal in the aftermath of last week. I don't mind they're getting away with it, as such, but she's a bit too chilled for my liking. #Emmerdale

It remains to be seen whether Kerry and Amy will eventually be caught out, but for now it seems things have been wrapped up…