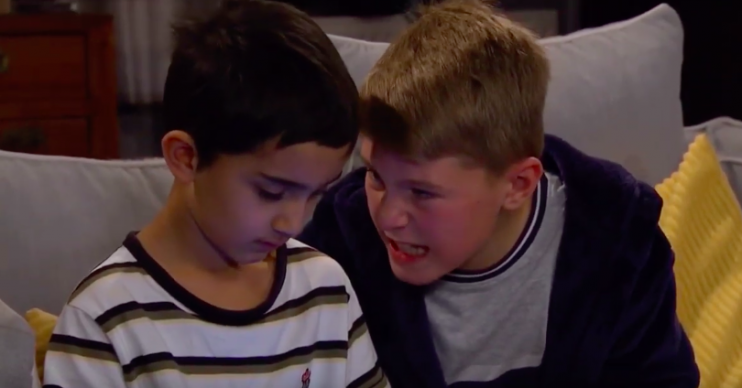 Laurel and Jai are oblivious to what Arthur's doing

Viewers of Emmerdale have been left confused as Arthur Thomas continued to bully Archie Breckle in front of their parents Laurel and Jai.

Fans of the show know that for weeks Arthur has been terrorising Jai’s son Archie, who came to live with his dad after the sudden death of his mother Rachel.

Jealous of the attention Archie was getting, Arthur started being horrible to him and at one point even knocked him unconscious after punching him.

And in Friday night’s episode (December 6, 2019) Arthur was unimpressed to learn his mum Laurel had invited her boyfriend Jai and Archie over for Christmas Day.

Laurel devised a plan to show Arthur how much fun they could all have at Christmas by making mince pies together.

When Arthur returned from school, Laurel and Jai were stood at the counter whilst Archie was at the table helping.

She asked her son if he would get the mincemeat out of the cupboard but Archie called out “I’ll get it.”

As boys leaned down to the cupboard, Arthur hissed: “She asked me.”

Surely they would have heard Arthur?

Although they were stood just inches away from the kids, the couple continued to talk about Christmas and how they think they’ve made a pretty good start getting through to Arthur.

Meanwhile, Arthur was still tormenting Archie saying: “If you’re coming for christmas, you do exactly what I tell you to do, or you’ll be in trouble.”

Viewers noticed Jai and Laurel were completely oblivious to how Arthur treated Archie.

Surely they would have heard Arthur? #Emmerdale

How did they not hear that #Emmerdale 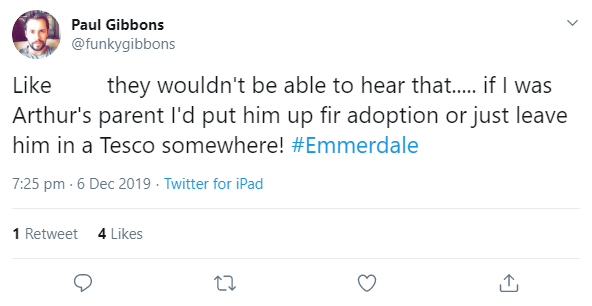 Viewers know that Laurel and Jai suspected something was going on with Archie when they discovered bruises on him, but Arthur quickly covered his tracks and blamed the bruises on Jimmy King.

Do you think Arthur will be caught out soon? Leave us a comment on our Facebook page @EntertainmentDailyFix and let us know what you think!