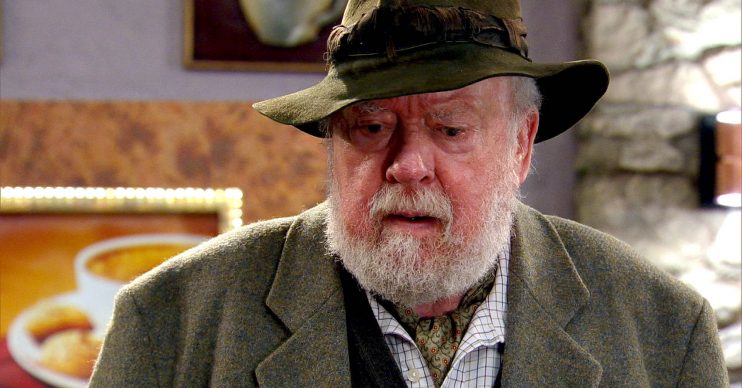 Sad new for Emmerdale fans – Freddie Jones, who played Sandy Thomas, has died at the age of 91.

Agent Lesley Duff confirmed: “It is with great sadness that I can confirm the death of Freddie Jones.

“Freddie was a much loved and admired actor, known for his triumphs in classical theatre, film and television.

“He will be greatly missed by all who had the pleasure of knowing him and most especially his family.”

Emmerdale viewers said goodbye to Sandy in February, 2017, as he headed off for pastures new, following the arrival of glamorous traveller Maisie.

She was over from Australia, where she is big pals with Betty, and came armed with comedy Oz gifts.

Sandy and Maisie instantly got on like a house on fire but she already had a ticket home booked.

But then came a surprise – Sandy opened an envelope among Betty’s presents and inside was a first class ticket to Down Under.

There followed some serious soul searching about whether he should follow his heart to new adventures, or stay with his beloved family.

Sandy decided to follow his heart and headed Down Under. His last appearance on screen saw Laurel organise a video call in the Woolpack, so all his friends and family can see how he was settling in.

And they discovered he was feeling right at home already!

Loved the Sandy scene. Such a touching scene. He’s going to be missed#emmerdale

Oh Sandy, I am going to miss you in the village. #Emmerdale

News of his death will hit many fans hard.

Leave a tribute for Freddie on our Facebook page @EntertainmentDailyFix