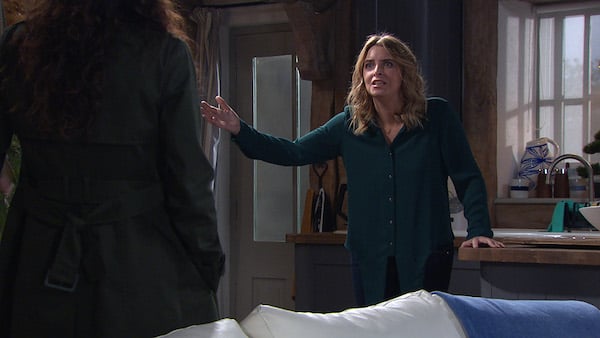 There’s trouble in next week’s Emmerdale when Aaron Dingle and Cain Dingle’s dodgy dealings lead to Moses Dingle being kidnapped by a dangerous gang.

After the last few weeks that Cain and Aaron have been through, it is no wonder they’re joining forces to focus on something other than cheating wives and incarcerated husbands… but their new business venture soon leads to trouble.

As always not a lot gets past Liv Flaherty and she is suspicious that something is going on between Aaron and Cain… and it seems she’s right when a mysterious stranger arrives in the village looking for the pair.

At the garage a newcomer called Sean approaches Cain, but he’s clearly not making a social visit, because Cain’s mood quickly darkens when he realises that Sean is from the gang who they stole a car from.

But Cain and Aaron aren’t ones to be messed with, and soon they get rid of Sean before finding themselves a buyer for the stolen car.

The pair head off together to meet the people buying the cars with Moses in tow, but while they think they have got away from Sean, little do they know he is lurking in the shadows and watching their every move.

Later Sean shows Cain and Aaron just how dangerous he is when the pair get a call to say that Moses has been kidnapped.

Both Cain and Aaron are stunned to hear that Sean and his gang have got Charity’s son, and all hell soon breaks loose when Charity discovers where her son is.

As Charity panics about her little one’s well-being, Cain and Aaron are left to deal with Sean’s demands as he tells them that he wants the car they stole back in return for Moses’s safety.

While the pair negotiate with Sean and his heavies, Charity is beside herself with rage, knowing that it is Aaron and Cain’s dodgy dealings that have lead her son into danger.

Later as the drama calms down, Charity is still on the warpath and no amount of apologising can make things right.

But it’s not just Cain and Aaron who feel Charity’s wrath… Chas is also on the receiving end of her anger when she defends Aaron’s actions, causing a huge rift between them.

Will Charity ever be able to forgive her family? And will Moses be returned safe and sound to the panicking Dingles?

Do you think Moses will be okay? Leave us a comment on our Facebook page @EntertainmentDailyFix and let us know what you think!