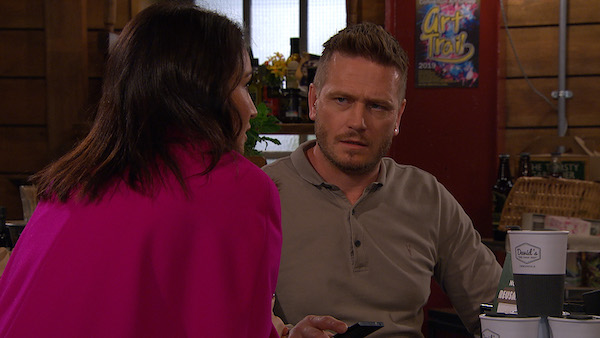 Next week’s Emmerdale sees David Metcalfe petrified about how to tell Jacob Gallagher the news that Maya Stepney is being released from prison.

Emmerdale fans will know that Maya went to prison back in June after grooming teenager Jacob while she was in a relationship with his stepdad, David.

However, she is set to be released next week, and David is worried that Jacob is still under her evil spell.

As David and Leyla Harding struggle to get their heads around the fact Maya is going to be a free woman next week, the pair are worried that she might get back in touch with Jacob after being in prison for the last 5 months.

Read more: Emmerdale fans beg Louisa Clein and Sandra Marvin to return to the soap as they reunite

The pair decide that honesty is the best policy and sit Jacob down to tell him the news about Maya.

But instead of the conversation turning into an argument like they thought it would, both David and Leyla are shocked when Jacob remains calm and composed as they breaks the news.

But while David and Leyla’s fears appear to be for nothing, it seems Jacob could be hiding his true feelings about Maya’s release when Leanna Cavanagh tries to be supportive and it doesn’t go down well with Jacob.

When the teenager goes missing, David and Leyla are convinced he has gone to see Maya, and it is a race against time to find him before he potentially gets to Maya’s side.

Whether Jacob and Maya come face-to-face or not is a closely guarded secret, but later Jacob agrees to speak to Leanna and the pair share a passionate kiss, which leads to them sleeping together for the first time.

But when Jacob acts distantly with Leanna after they have done the deed, she is left heartbroken. And when he leaves abruptly, Leanna is left wounded even further by his rejection.

Back at home, Leanna tells Bernice Blackstock that she slept with Jacob and makes her promise not to tell her dad, Liam Cavanagh what happened.

However when Leanna is sick after taking the morning after pill, nothing gets past Dr Cavanagh and it’s not long before Liam is racing over to find Jacob, accusing him of taking advantage of his daughter.

Later everyone is in shock as Liam is arrested for assault after he punches Jacob during their fight. But where does this leave Jacob’s feelings for Maya?

Did he sleep with Leanna because he’s over the manipulative teacher? Or was it his way of trying to forget the woman he is still in love with?