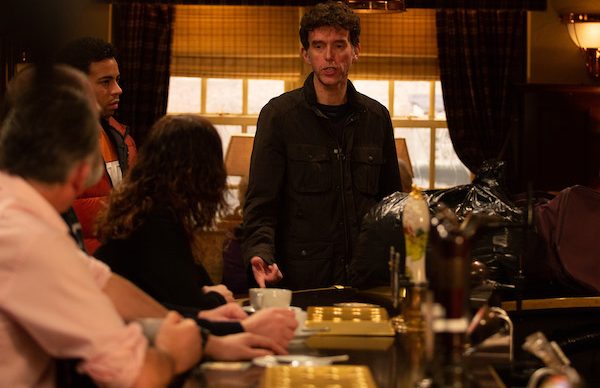 His troubles are only just beginning...

There’s trouble for Emmerdale’s Marlon Dingle next week when he makes a shocking discovery that will leave him feeling betrayed by his entire family.

Fans have watched poor Marlon struggling over recent weeks as he was locked up for killing Graham Foster – a crime viewers know he didn’t commit.

But next week sees things are looking up for Marlon as he is out of prison and feeling buoyed by the support of his friends and family around him.

However, his happiness doesn’t last long, because he is soon given the heartbreaking news that his already struggling daughter, April, is being bullied at school.

While April puts on a brave face for her dad, it is clear that she is struggling with her classmates at school brandishing her dad a murderer, and even Marlon’s reminder that friends should be loyal and trustworthy people doesn’t seem to help.

But it’s not long before Marlon is getting more bad news when he discovers it was Charity and Ryan who stole Kim’s money from Graham on the night that he died.

Fuming that members of his own family have been sitting on evidence that could have saved him from jail, Marlon decides that the rest of the family needs to know the truth and gathers everyone in the pub.

Marlon then announces to everyone that Charity put her own freedom before his, and everyone is stunned as the news sinks in.

But when another bombshell is dropped on Marlon – this time that Kim Tate might have hired someone to kill Graham – he really sees red and feels utterly betrayed.

With the reality that guilty people have happily seen him serve time in jail for a crime they knew he didn’t commit, Marlon’s distrust of everyone around him hits an all time high and he is soon making the huge decision that Mandy needs to move out.

As he dumps her packed bags at the Woolpack, Marlon demands that she finds somewhere else to live.

But Mandy isn’t the only one to find herself on the wrong side of Marlon.

The rest of the family are left speechless as Marlon declares that he is done with the entire Dingle clan and tells them he is washing his hands of them from now on.

But will Marlon really turn his back on his whole family when he’s at his lowest point?

Are you pleased to see Marlon is a free man? Leave us a comment on our Facebook page @EntertainmentDailyFix and let us know what you think!