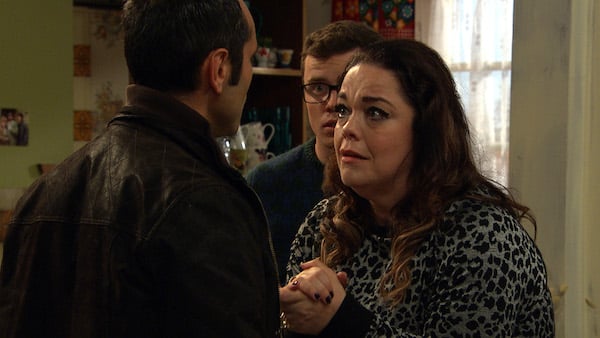 Emmerdale SPOILERS: Mandy and Vinny fear for their lives as secrets are exposed

Their dodgy past is catching up with them

Next week’s Emmerdale sees Mandy and Vinny Dingle in grave danger as casino boss Terry arrives in the village looking for revenge.

The pair are clearly desperate to pay Terry back his money, and are continuing with the plan to get their hands on Lydia’s money.

But as the pair try and hack into her online banking they’re caught in the act by Lydia herself and they desperately try and explain themselves.

However, it doesn’t take Lydia and Sam long to realise what is going on and a fuming Sam calls Dingle court, much to Mandy’s horror.

Realising that things don’t look good for her and Vinny, Mandy tells him they’re going to make a run for it, and the pair flee the village after stealing the Dingle van.

But clearly they didn’t pick their getaway vehicle very well, because they don’t get very far before the van breaks down and they’re left stranded in the woods.

The pair hide in the trees, hoping no one will find them. But of course they’re soon caught and brought home for Dingle court… and things don’t get off to a good start.

After a lot of arguing, Mandy eventually she agrees to tell the Dingles the truth about what her and Vinny were up to before coming to the village.

Mandy confesses that they were running a card counting scam at various casinos, all run by Terry.

And while the news that Mandy’s dealings were dodgy comes as no surprise to anyone, it is then revealed to viewers that Charity was also involved in the scam.

As the Dingles deliberate their verdict, Mandy is sure that the court will vote in their favour… but Vinny’s more worried that they will work out his dark secret that he’s been hiding since he arrived in Emmerdale.

But what has he been lying about?

However what the family think of them is soon the least of their worries when dangerous Terry tracks them down in the village and arrives on the Dingles’ doorstep demanding his money.

Mandy and Vinny are terrified as Terry threatens them… but will the Dingles stick up for them in their hour of need?

Or is this the moment they will wash their hands of the scheming pair?

Do you think Mandy and Vinny deserve a second chance? Leave us a comment on our Facebook page @EntertainmentDailyFix and let us know what you think!