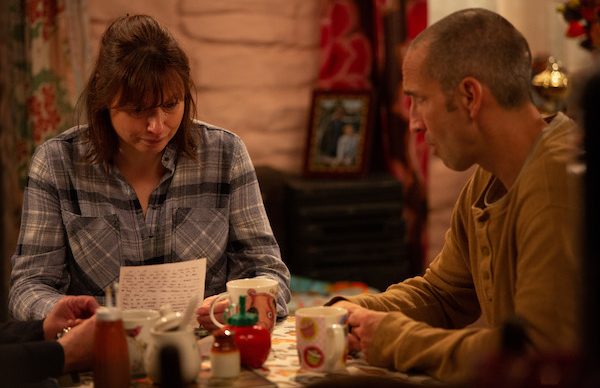 Emmerdale SPOILERS: Lydia finds out she could have Huntington’s disease

Will she take the test to find out?

Next week’s Emmerdale sees Lydia Hart’s world shattered when she discovers her father died from Huntington’s disease… and that she could have the same illness.

Lydia had her life turned upside down recently when she was mysteriously given £10,000 from a secret benefactor.

After Mandy Dingle tried to steal the money but was caught red-handed, she tried to make it up to Lydia by breaking into the solicitors’ office so they could find out who it was that left such a substantial amount of cash.

It turned out the generous donation was from Lydia’s estranged mum, Agatha Finn, who had been trying to track her daughter down.

Read more: Emmerdale fans beg Louisa Clein and Sandra Marvin to return to the soap as they reunite

However when Lydia arrived at the address she had for her mother, she was told by her long-lost sister, Beth, that their mum had died just three weeks earlier.

However in a cruel twist it turns out that Agatha was actually live and well… and that Beth was determined to keep the pair apart.

But next week’s Emmerdale sees Mandy with fresh determination to get Beth to explain herself and she goes back to the house to confront her.

As Mandy barges into Beth’s house, she is shocked to find Lydia’s presumed-dead mum there and Beth’s actions are soon revealed.

Agatha begs Mandy to take her to Emmerdale so that she can see her daughter that she’s not seen for years, and Mandy starts to wonder if she has done the right thing.

However, once in the village it seems that Agatha has got a lot to tell Lydia after so many years apart and Lydia braces herself for what her mum has to say.

At the Dingles Lydia prepares to face her past, but when her mum tells her that she has never stopped thinking about her, Lydia starts to soften… even if her mum does constantly refer to her as Jenny.

However this reunion isn’t all happy, because Agatha soon drops a bombshell on Lydia that is so huge it will shatter her world.

Agatha reveals that Lydia’s father died of Huntington’s Disease and that there is a very high chance that Lydia could be living with the same thing but doesn’t even know it.

Lydia is shellshocked by the revelation and shares the upsetting news with the Dingles, leaving everyone reeling.

But the big question is, will Lydia get the tests done to find out if she has Huntington’s? Or would she rather remain blissfully ignorant to the possibly devastating diagnosis?

Do you think Lydia should have the test? Leave us a comment on our Facebook page @EntertainmentDailyFix and let us know what you think!