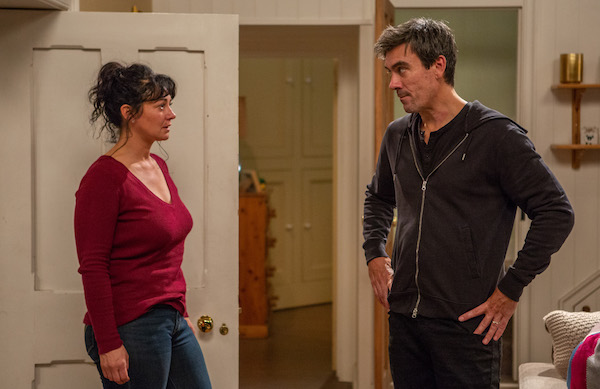 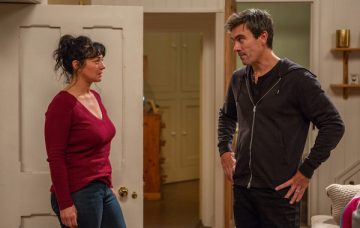 Emmerdale SPOILERS: Cain and Moira clash over her vile behaviour

Emmerdale favourites Cain and Moira Dingle will come to blows next week, in dramatic scenes that could leave the future of their marriage in question.

Viewers know that Cain is totally unaware that his wife is having a passionate affair with farmhand Nate Robinson.

When Cain finds out, it’s unlikely their relationship will survive unscathed.

But it’s not just the affair that could blow their family apart – her increasingly aggressive behaviour also causes concern in upcoming scenes.

Next week, Cain is disgusted when Moira exposes Harriet in front of her congregation over her relationship with Will.

We’re not sure Moira has the moral high ground to accuse anybody else of bad behaviour, though! Isn’t that a serious case of pot calling the kettle black?!

At the beginning of the week, Moira and Nate are nearly caught having sex AGAIN when Matty almost walks in on them in the caravan.

When he can’t get in, he sparks up a joint and plonks himself right outside to enjoy it, unaware his mum is just inches away.

The next day, Harriet tries to support Moira ahead of the anniversary of daughter Holly’s tragic death.

While Moira is grateful at first, she’s shocked to hear about Harriet’s relationship with Will – and even more stunned when Cain reveals he knew about their romance.

Becoming convinced that Will was the one who sold Matty the weed, Moira becomes incandescent with rage.

Cain tries to talk her out of it, but Moira storms around to the church to air her grievances.

Intent on giving Harriet and Will a peace of her mind, Moira interrupts the Harvest Festival and reveals Will’s past as a drug trafficker.

There’s a ripple of shock throughout the congregation and Harriet is horrified to see her relationship going public in the worst possible way.

Understandably, Cain is left completely appalled by his wife’s venomous behaviour and the pair refuse to see eye to eye.

How soon before Moira’s dirty laundry is aired in public?

What do you think of Moira? Leave us a comment on our Facebook page @EntertainmentDailyFix and let us know what you think!