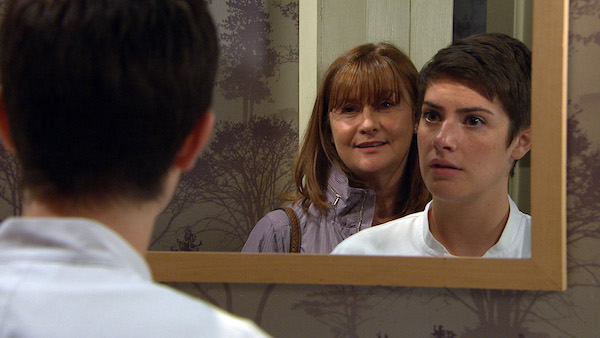 Victoria's nightmare is only just beginning

Next week’s Emmerdale reveals Victoria Sugden’s nightmare is only just beginning when she comes face-to-face with her rapist’s mother.

Soap fans have seen Victoria go to hell and back over the last few months after being raped following a night out with friends.

The pub chef then discovered she was pregnant with rapist Lee’s baby… and left her family shocked when she announced she would be keeping the baby despite the difficult circumstances it was conceived in.

However, just when Victoria thought things couldn’t get any worse, she is followed into the Woolpack toilets by a mysterious woman next week, who turns out to be Wendy, Lee’s mum.

Victoria is horrified when Wendy starts quizzing her about the ‘lies’ she has been spreading about Lee, and no matter how much Victoria tries to tell her version of events, Wendy remains convinced that her son is innocent.

As Wendy gets more confrontational, Charity comes to Victoria’s rescue just in time, instantly protecting her and getting rid of Wendy.

But sadly that’s not the last we will see of Lee’s mum, because the following day she is back, and this time Lee is with her.

Victoria, Diane and Amy are stunned to see Lee and Wendy in the village and become horrified as the pair approach them.

A terrified Victoria is rooted to the spot as Lee confronts her about the posters that were put up around his work.

While viewers know Robert and Aaron were responsible for posting the pictures of Lee with the word ‘rapist’ in bold below, Lee is convinced this is Victoria’s handy work and blames her for him getting the sack at work.

Victoria finally makes her escape and flees, leaving mouthy Amy to stand up for her friend and tell Lee where to go.

Soon Robert arrives after being called by Victoria, and he has to be restrained to stop him hitting Lee, but while Lee deserves everything he’s got coming to him, annoyingly Robert’s actions just let him play the victim.

Clearly Lee and Wendy aren’t going to let this go, and the pair then step up their vendetta against Victoria by heading to Mill Cottage and forcing their way in through the front door.

Victoria is terrified at being targeted by Lee once again, and races upstairs to escape. But as she tries to flee, she falls and hurts herself.

Diane is clearly worried about Victoria – and of course her unborn baby – but as she dashes to help her, she accidentally lets slip about Victoria’s pregnancy, leaving Lee and Wendy speechless.

How will Lee react to the fact he is going to be a dad?

How do you think Lee will react to the news Victoria’s pregnant? Leave us a comment on our Facebook page @EntertainmentDailyFix and let us know what you think!