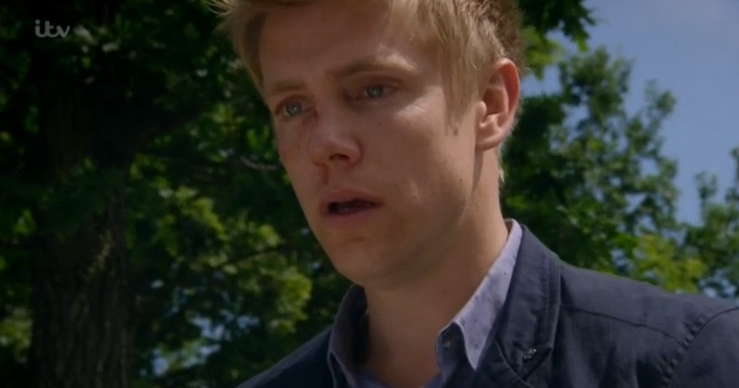 Will she send her own brother to prison?

Next week sees Emmerdale’s Robert Sugden in court for his plea hearing… but as Victoria Sugden struggles to lie for her brother in court, it seems he could he heading for a long stint in prison.

Robert is facing life in jail if he gets found guilty for grievous bodily harm with intent against Victoria’s rapist Lee Posner, and next week things take a worrying turn when a meeting with his solicitor goes badly.

Worried that he could be spending the rest on his life in prison for attacking Lee after a confrontation over his blackmailing, Robert is irritable when husband Aaron tries to reassure him ahead of his meeting with his legal team.

But as Robert goes through his case, it is clear that he is seriously worried as his future hangs in the balance.

During the meeting Robert is left horrified when his lawyer suggests that he should plead guilty, and despite him being adamant he will do no such thing, it is weighing heavily on his mind as he heads home.

But while Robert struggles to cope, Victoria is having a drama of her own as she battles with her conscience after lying to the police to protect her brother.

She knows that Robert’s attack on Lee might have been provoked but it definitely wasn’t self defence, and she is wondering if she can really go through with lying to the court about what happened.

Knowing that Robert’s whole defence hangs on her testimony, Victoria’s mind is in turmoil.

She ends up confessing to a stunned Marlon Dingle that she lied to the police to protect Robert.

Fearing that lying in court will make her no better than evil Lee, Victoria has got some serious thinking to do as the day in court arrives.

But will she really decide she can’t testify in court and leave Robert defenceless?

Emmerdale airs weeknights at 7pm on ITV, with an extra episode at 8pm Thursdays.

Do you think Victoria will help Robert? Leave us a comment on our Facebook page @EntertainmentDailyFix and let us know what you think!