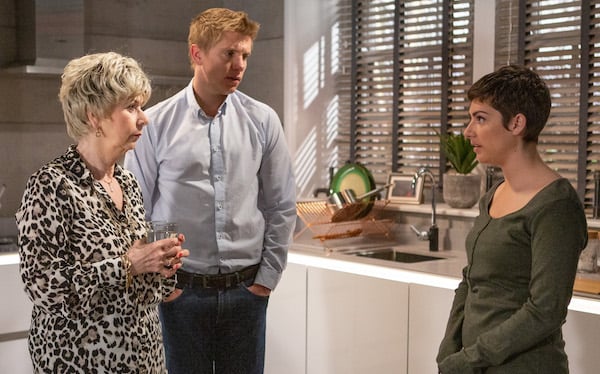 Emmerdale SPOILER: Victoria announces she is keeping her baby

Will her friends and family support her decision?

Victoria Sugden leaves her friends and family stunned in next week’s Emmerdale as she reveals that she plans to keep her baby after falling pregnant following her recent brutal rape.

Emmerdale fans watched in horror as poor Victoria was attacked in her own home as part of the soap’s Big Night Out flashback scenes.

The horrific rape came after Victoria got separated from her friends and brother, Robert, after going on a evening out at a nightclub.

After trying, and failing, to find Robert for a lift home, she went to get some food from a kebab van, only to bump into Lee, who she then innocently shared a taxi home with.

The pair seemed to be getting on well, and Victoria even invited him in for a cuppa to say thanks for escorting her back to the village safe and sound.

Little did she know she was inviting her attacker into her home, something that she will live to regret for the rest of her life.

But after Lee attacked Victoria in her own bedroom, it understandably took the pub chef days to open up about what had happened to her, and she eventually confided in Moira Barton.

After going to the police, Victoria then bravely told her brother Robert and also Diane about what had happened to her, leaving the pair reeling.

Next week will see news of Victoria’s attack reach more Emmerdale residents as she can’t hide the fact she is pregnant anymore as her morning sickness takes hold.

As Robert and Diane struggle with the reality that Victoria is carrying her attacker’s baby, they’re left speechless when she also reveals that she plans to have the baby and won’t be having a termination.

But while Diane tries her best to support Victoria in her decision, Robert can’t cope with what is happening, and he confesses that he’s not sure he’ll ever be able to understand why she is keeping the baby.

However, it’s not just Moira, Diane and Robert who are concerned about Victoria.

Marlon is also worrying about his colleague and friend, and becomes determined to work out what is wrong with her.

As he probes into what has got her so down, Marlon is left stunned when Victoria reveals she was raped.

Before long Victoria realises she is going to have to tell more people about her attack, and soon she is digging deep and trying to find the words to explain to Matty, Chas, Ellis and Charity about what happened with Lee.

With everyone reeling from Victoria’s bombshell, how will they take the news that she is pregnant following the attack and plans to keep the baby?

Will her friends and family support her in her moment of need, or is this a battle that Victoria is facing alone?

And is Robert going to go after Lee and get revenge, just like he promised?

Or could that be left to Victoria’s estranged husband, Adam Barton?

Speaking of her character’s struggles to The Mirror, Isabel Hodgins, who plays Victoria explained Vic was hoping she’d have got pregnant by Adam.

“In her ideal world, it would be with Adam, and Adam would have been able to have children,” she said.

“That’s the dream. Everything I do is so that Adam will come back.”

Adam left the Dales in 2018 after taking the blame for killing Emma Barton. In fact it was his mum, Moira, who pushed Emma over the edge of a bridge, but Adam decided to protect her and go on the run.

Isabel added: “I think her trust has scuppered, and I’d be interested to see what kind of mother she becomes after something like this has happened to her.

“But if Adam came in and saved the day that would be cracking!”

Do you think Victoria should keep her baby? Leave us a comment on our Facebook page @EntertainmentDailyFix and let us know what you think!