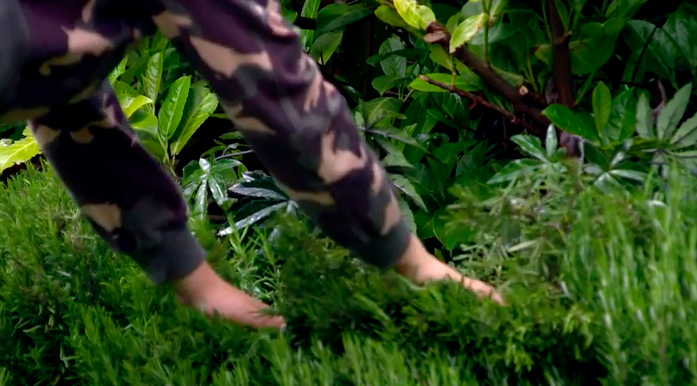 Emmerdale SPOILER: Shock as ‘drugs farm’ discovered in the village

The drugs leave Doug shocked as he's gardening in the village

There’s going to be a shock in Emmerdale when a secret drugs farm is found in the middle of the village.

Liv Flaherty and Doug Potts will be doing a spot of gardening when they discover a hidden stash of marijuana plants secreted in the gardens of the B&B.

But with violence, affairs and abuse running rampant in the village, this is one thing the villagers don’t have to worry about – because the culprit of the illegal plants is long dead.

It will become apparent that hapless Gerry Roberts is responsible for the growing of the drugs, much to Doug’s disappointment.

Gerry was murdered by his best friend Lachlan White last year after he discovered the millionaire had killed his mother and grandfather.

Now, next week a reminder of Gerry will be found when Doug stumbles across the plant.

In a first look clip posted on Emmerdale’s website, Doug discovers it and calls Liv over for confirmation.

As Liv laughs at Gerry’s boldness, Dough says: “It’s not funny, this is a criminal offence.

“It was hidden, he had the sense to conceal it behind a rosemary bush. It would have masked the smell.”

Liv jokes: “Well now we know why he was so interested in gardening.”

But Doug isn’t in the mood to joke about it and tells her: “I feel used.

“My expertise sullied. If I had him here now I’d march him down the back streets of Hotten, let him see where it leads.”

But as Liv tells him that Gerry might have thought he was growing tomatoes or something else, Doug finally sees the lighter side and agrees to dig the plant up and keep it a secret so Gerry’s name remains int act.

He tells her: “Not a word of this to anyone, his reputation is safe.”

But could he be planning on using the plant himself?