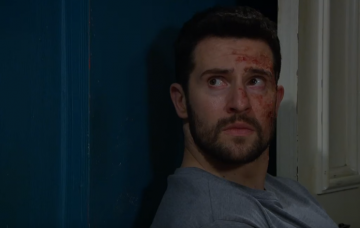 Ross Barton continues his mission to self-destruct next week when he sleeps with local junkie Dawn.

He’s still reeling from the shocking discovery that the love of his life Debbie Dingle was responsible for the acid attack which has left him scarred for life.

But his hopes are raised when Rebecca White gets in touch and suggests they have a lunch date together. Pete is worried but Victoria thinks its a great idea.

It backfires horribly when Rebecca doesn’t turn up, leaving Ross utterly gutted and feeling extremely sorry for himself.

He ends up storming out and is found by Dawn. One thing leads to another and the pair end up sleeping together.

But then Rebecca arrives with Victoria and is hurt when she realises what’s gone on between Ross and Dawn.

Ross begins lashing out at everyone’s interference and Pete becomes worried that it’s all down to his discovery about Debbie.

Pete then confronts Debbie in the pub and tells her she’s the one responsible because she’s the one who ruined Ross’s life. Seems he’s overlooked the fact that Ross almost killed her.

Viewers were in bits last week when Debbie finally told Ross that she was the one who ordered the attack on him.

Ross was heartbroken to discover that the love of his life was the very person who ruined his life, and even more dismayed to learn she was back with Joe Tate – who the attack was really meant for.

Debbie’s confession came after she was accidentally shot by Ross as she visited Joe at Home Farm.

Ross had been lying in wait for Joe with the gun after learning that a ‘young, rich bloke’ had paid acid thrower Simon McManus a lot of money to keep his mouth shut about the attack.

Assuming this meant Joe had ordered the attack, Ross headed to Home Farm with the gun which was loaded with one bullet and played a twisted game of Russian Roulette with the millionaire.

But during a scuffle, the gun accidentally went off – just as Debbie arrived – shooting her. She was seriously wounded and even flat-lined at hospital.

Luckily medics were able to save her life while Joe made out to Ross that he was indeed behind the attack.

Debbie was horrified when she heard that Joe was taking the blame and finally confessed the truth but Ross stormed out before she could tell him the full story.

Should Ross go to the police about Debbie? Leave us a comment on our Facebook page @EntertainmentDailyFix and let us know what you think!