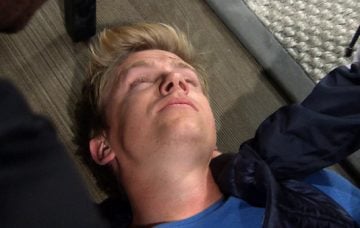 He collapses and has a fit while franticly looking for Rebecca

Robert Sugden is left in a critical condition next week after he collapses and has a fit while looking for Rebecca White.

He’s sent into a frenzy, trying to find the mother of his young son Seb, after Noah Dingle tells him and boyfriend Aaron that the police are now looking for a body at Home Farm.

No one knows what has happened to Rebecca, who was last seen being smothered by her murderous nephew Lachlan White last month.

When Robert sees the shrine that has been started for Rebecca, he incredulous and begins to destroy it while Aaron watches on in horror.

Zak tells Aaron that he needs to get Robert under control but Robert won’t stop searching for Rebecca, leaving Aaron frustrated about how he’ll get through to him.

An exhausted and woozy Robert then heads out to look for Rebecca again but suddenly collapses and starts to fit.

A frantic Liv calls for a doctor, while Aaron watches on feeling helpless.