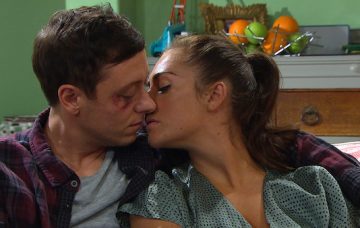 Matty and Victoria Barton share a kiss next week, which will no doubt leave Emmerdale fans delighted.

Viewers have been hoping that the pair would find romance together since Matty returned to the village.

As the week gets underway, Matty is happy when Charity offers him a job behind the bar at the Woolpack, meaning he and sous chef Victoria will be working closely together.

When Victoria gets a call from a guy asking her on a date, Matty is encouraging, but it’s obvious he’s not really feeling what he’s saying.

Could he possibly be feeling a bit of the old green-eyed monster?

When Victoria arrives at the pub for her date with newcomer Ellis, it’s obvious that Matty is totally not happy with the whole situation.

Matty soon spots Ellis flirting with other girls at the pub and confronts him over it, steeling himself for a fight when Ellis starts mocking him.

Marlon is forced to step in to stop the brawl before it gets out of hand, but he finds himself caught in the middle of it and it’s Matty’s mum Moira who finally break it up.

But when she accidentally refers to Matty in the wrong gender, he flies off the handle and decides to move in with Victoria who is flatemate-less following Rebecca White’s disappearance.

But as Matty makes the big move, he starts to wonder if he might have romantic feelings for Victoria.

When she makes a move and tries to kiss him, how will he react?

Fans have hoped for a romance between the pair after believing they saw a spark of chemistry between the former school frenemies.

Transgender Matty – who was last seen in the village as Hannah Barton – has stayed away from his family as he transitioned.

But he returned to Emmerdale after six years away to get his birth certificate.

Rather than knock on the door, he broke into his former home and was caught by step-dad Cain Dingle, who didn’t recognise him.

After being kicked out by his mum, who struggled to come to terms with his new identity, Matty found a place to stay in Victoria’s van.

Victoria is married to Matty’s brother Adam, but the pair are estranged as he is currently on the run from prison.

Despite the obstacles between them, fans believed a relationship was budding. Are their predictions about to come true?

Should Victoria and Matty get together? Leave us a comment on our Facebook page @EntertainmentDailyFix and let us know what you think!