As if Robert and Aaron don't already have enough stress on their shoulders, in next week's Emmerdale there is even more for them to worry about when Liv collapses.

The drama unfolds as the teenager has a seizure in the cafe, with Paddy, Marlon and Cain rushing to her aid. 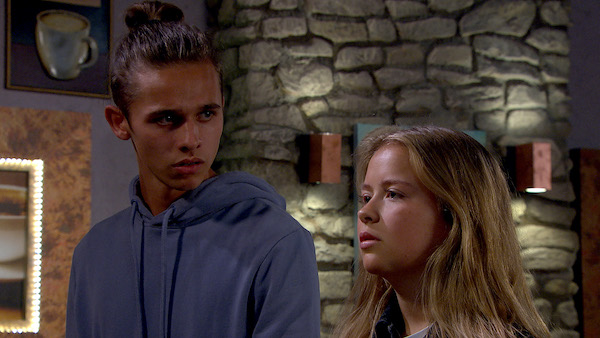 Robert, already weighed down by so much anxiety, is beside himself.

Later, at the hospital, as he and Aaron await an update, Robert decides to reveal the terrible news he has been sitting on from his solicitor - he could go to prison for life for attacking Lee.

Aaron is furious that he's been keeping this devastating news from him and lashes out, terrified at the thought of effectively losing him for good.

Aaron's furious Robert has been keeping the truth from him (Credit: ITV)

Weary after his husband's reaction to the bombshell, Robert then steels himself to tell Liv and Victoria.

It's a terrifying prospect, given how obviously vulnerable they both are now.

And it's looking increasingly like Robert going to prison will be the swan-song storyline for actor Ryan Hawley who has played him since 2014.

Robert launched a vicious attack on Lee Posner, after he raped his sister, Victoria.

She fell pregnant and Lee taunted her, demanding access to the baby once it's born.

Lee has taunted Victoria since the attack (Credit: ITV)

Victoria was plotting to move away to Cornwall with step-mum Diane, when Robert hit Lee over the head, leaving him in a coma.

Will you be sad to see Robert and Aaron separated?