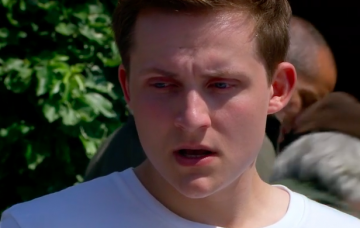 Emmerdale SPOILER: Lachlan White gets away with ANOTHER crime

Viewers aren't going to like Lachlan's latest round of luck

Lachlan White gets away with another crime next week in Emmerdale.

The teenage killer has murdered most of his family and friends and inexplicably gotten away with all of them.

Viewers have been growing increasingly frustrated as Lachlan continues to remain free to kill again.

And now a spoiler clip for next week’s episodes of the ITV soap has revealed he has yet another lucky escape.

Just weeks after smothering his aunt Rebecca in an abandoned cabin despite the woods teaming with people outside, Lachlan will be horrified when he discovers Priya has discovered it.

With the cabin part of her new glamping business, she is planning on putting the camping pods back onto it.

And while in the area she found the cabin and realised someone had been using it.

Priya told the group: “I was up there earlier and it looks like someone’s tidying up.

“There was nothing eco of cleaning the place with bleach, the whole shack reeked of it.”

And as Lachlan began to listen, Priya went on to say that she had hired a dog patrol to keep the cabin safe and sniff out anyone staying there.

But as he had already got rid of Rebecca he could breathe a sigh of relief.

It was revealed on Friday that Lachlan’s killer secrets will be exposed in September, but not before he tries to claim more victims.

A spoiler trailer revealed the dramatic moment he loads a gun and hunts down Robert Sugden.

But the bigger shock comes when he fights with girlfriend Belle Dingle after she finds blood on his clothes.

How many more killings can Lachlan get away with? Let us know what you think by leaving us a comment on our Facebook page @EntertainmentDailyFix!