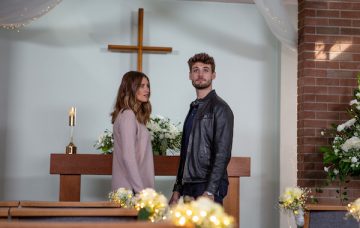 Joe surprises Debbie with a wedding - but will they get to say 'I do'?

Secret weddings are the order of the day in Soap Land next week as Joe Tate follows in Corrie’s Daniel Osbourne’s footsteps and sets up a surprise wedding for Debbie Dingle.

Debs has been stressed out lately what with her daughter Sarah Sugden being in hospital awaiting a heart transplant so wedding planning hasn’t exactly been top of her list.

So when Joe arrives at the hospital and asks to speak to Debbie alone she doesn’t know what he’s about to tell her.

He whisks her down to the hospital chapel and tells her that they’ll be getting married later that day.

Debbie is stunned but agrees, especially as it means Sarah can be at the wedding, which is what she wanted.

Cain arrives and Debbie tries to keep quiet about what the wedding but finds herself confessing to Cain that she’s marrying Joe that day.

She tells him that if he interferes or tries anything shifty she’ll never forgive him.

Soon Debbie has changed into her wedding dress and – with Sarah by her side – she heads to the chapel, excited about the future.

But she’s soon left wondering if she’s made a huge mistake trusting Joe when he fails to turn up to the ceremony.

Desperate, she calls and calls him – but there’s no reply.

Where is Joe? Has he really jilted her at the alter – or is someone else behind his sudden vanishing act?

A newly returned superbitch with her sights set on becoming lady of the manor at Home Farm maybe?