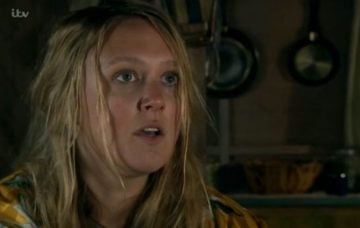 Emmerdale SPOILER: Is Emmerdale about to reveal Rebecca White’s fate?

Is she dead or alive?

Fans have been guessing what’s happened to Rebecca White after she was seemingly disposed of by killer nephew Lachlan.

But as the plot thickens next week, it doesn’t look like we will have to wait much longer to find out what’s really happened to the desperate new mum.

After Lachlan appeared to smother Rebecca on 9th August, fans have been left fearing the worst, with some even guessing that the killer has got her body hidden in a suitcase that was featured at the end of the gripping episode.

But while the truth about what happened to Rebecca still remains a mystery, it looks like the law could be catching up with Lachlan by next week.

The serial killer, who has bumped off his best friend Gerry, Gerry’s fake uncle Terry, and both his own mum and grandad, is set to be shocked when Doug Potts arrives at the Woolpack with upsetting news.

It’s top secret what Doug reveals, but whatever it is that he has found out leaves Lachlan seriously rattled.

As Lachlan reels from Doug’s revelation, it looks like the killer might struggle to hide his increasingly odd behaviour next week.

Could the net be closing in?

But what did Doug have to say? Have the police found something incriminating up at the cabin in the woods?

Or is there something linking Lachlan to one of his other murders that has surfaced?

One thing is for sure, it looks like the killer is about to get his comeuppance at last.

Do you think Rebecca is dead? Leave us a comment on our Facebook page @EntertainmentDailyFix and let us know what you think!