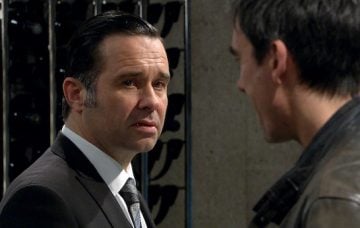 Will there be justice for Joe

Joe may be gone (sorry, everyone, he really is) but his murder has set up a very interesting dynamic between Cain and Graham.

Graham of course did away with the (fake) ‘Lord’ of Home Farm, but Cain think he’s responsible for killing him.

He apparently snuffed him out with a single blow but, as Graham sent him away saying he would dispose of the body, Joe’s fingers twitched.

Later Graham was seen emerging from the woods and telling his actual boss Kim Tate that Joe had been dealt with.

Read more: Kim Tate WILL be back to cause more chaos

Now Cain is roaming round the village with guilt hanging heavily around his neck and the fear that Graham has something on him.

And, as police start asking questions around Joe’s disappearance, Graham issues the bad boy with a very sinister warning.

The old bill have discovered from Ross’s attacker Simon that Joe paid him off to keep quiet because of Debbie’s involvement in the assault (which was meant for Joe, not Ross!).

When they find no trace of the handsome Tate, the police quiz Cain.

On edge, he snaps that he’s not Joe’s keeper and doesn’t have clue where he’s gone.

Read more: What now for Graham after killing Joe Tate?

Watching on from a distance, Graham isn’t impressed by Cain losing his cool and warns him to get away for a while to sort himself out.

Otherwise his behaviour will lead the police to their door… and he can’t have that!

Do you think Graham should be caught for killing Joe? Leave us a comment on our Facebook page @EntertainmentDailyFix and let us know what you think!