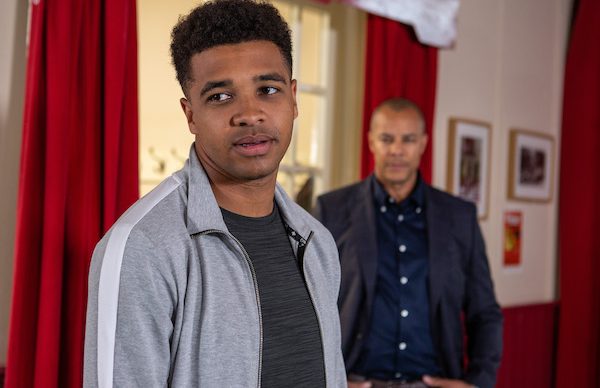 Emmerdale SPOILER: Ellis is stalked by a face from his past

Will he be pleased to see his dad?

Next week’s Emmerdale sees Ellis Chapman come face-to-face with his estranged dad, Al Chapman. But will anyone in the village be pleased to see him?

Ever since he arrived in Emmerdale, Ellis has found himself at the centre of some of the biggest dramas.

Most terrifyingly, he was stabbed earlier this year after a night out clubbing with his brother Billy.

But Ellis has worked hard to get his life back on track and soon he is set to be making a fresh start as he begins a new business venture with Billy.

However, just when it seems things are finally going well for Ellis, he is stunned when his estranged dad arrives in the village to stir up trouble.

Al Chapman – played by Harry Potter star Michael Wildman – couldn’t have picked a worse time to arrive in the village, because next week sees the usually level-headed Jessie going off the rails after losing her job.

The former head teacher of Hotten Academy is devastated when she loses her job following a meeting with the board of governors about her performance in her role, and she soon hits the bottle to numb the pain of losing the career she loves.

Drunk and humiliated about losing everything, Jessie doesn’t react well when Nicola starts making sneaky remarks about what happened with Maya.

Fuled by the drink and her anger, Jessie soon lashes out at everyone in the pub, telling them a few home truths about the children from the village and what she really thinks of them.

Seeing his wife acting totally out of character, Marlon escorts her out of the pub. But instead of being grateful that Marlon has saved her from further humiliation, Jessie continues to lash out, this time directing her wrath at him.

Marlon, Billy and Ellis walk Jessie home, but as they make their way back little do they know they’re being watched by a mysterious figure.

The next day Ellis is stunned when he comes face-to-face with the man who was watching them and it soon turns out it is his estranged dad, Al.

Al has come to Ellis posing as a potential client for his personal training business… but will Ellis be pleased to see his dad after all this time?

Despite his attempts to tell Jessie that his dad is in the village, they keep getting interrupted at April’s birthday party, and before he can get Jessie alone to tell her about Al, they’re interrupted by a car horn outside.

Jessie is stunned to see her ex in the village and is forced to quickly explain to Marlon who Al is. But it doesn’t seem anyone is that pleased to see him. But why?

Will Ellis manage to build bridges with the father who has been absent for so long? Or is Al in the village to cause more trouble for the family?

Are you looking forward to Al’s arrival in the village? Leave us a comment on our Facebook page @EntertainmentDailyFix and let us know what you think!