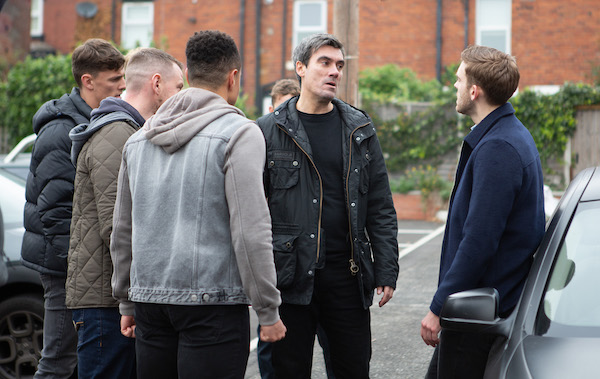 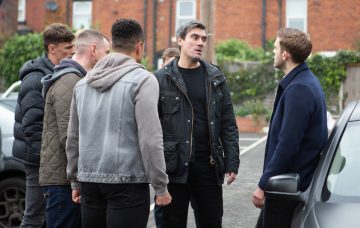 Cain Dingle finds himself in grave danger this New Year when he goes after a gang who have attacked Matty Barton, only to find at the crucial moment that he has lost his urge to fight.

Matty is left battered, bruised and humiliated when he is attacked on New Year’s Eve by a former boyfriend that he used to date back when he was Hannah.

But when a broken Matty tells Cain what happened the next day, the step dad is left fuming that someone could stoop so low and is soon seeking revenge.

Cain is a man on a mission as he lies in wait for Matty’s attacker, eventually spotting Issac outside a pub on New Year’s Day.

Cain marches up to Issac and seizes the moment in his usual style by grabbing Issac by the collar, spoiling for a fight. But, right before he can land his first punch, Cain suddenly freezes.

As memories of what happened with Joe come flooding back to him, and still believing that he killed Mr Tate with a single blow thanks to Graham’s lies, Cain starts to backtrack on his attack on Issac.

Viewers will know that Cain believes he is the one who killed Joe after punching him during a fight over Debbie, when actually it was Graham who finished Joe off and dumped his body by Hotten viaduct.

But there’s just one problem as Cain’s confronting Issac… and that’s the gang of friends his nemesis has got as back up.

As the lads circle Cain, he’s left terrified as they turn the tables on him, a situation that the old Cain would have handled no problem.

The next day Cain falls through the farm door bloody, beaten and broken, leaving Moira terrified about what he has been up to.

As Cain explains what happened, he tells Moira they can’t go to the police about his beating because questioning could lead to the authorities working out what happened to Joe.

But while Moira instantly agrees, it seems Victoria has already persuaded Matty to report his attack, leaving Cain and Moira fearing the worst.

As the police head over to speak to Cain he panics that this could be the moment his darkest secret is revealed.

Will he be able to keep his cool while being questioned? Or is Cain about to crack under the pressure?

Do you think Cain has lost his touch? Leave us a comment on our Facebook page @EntertainmentDailyFix and let us know what you think!