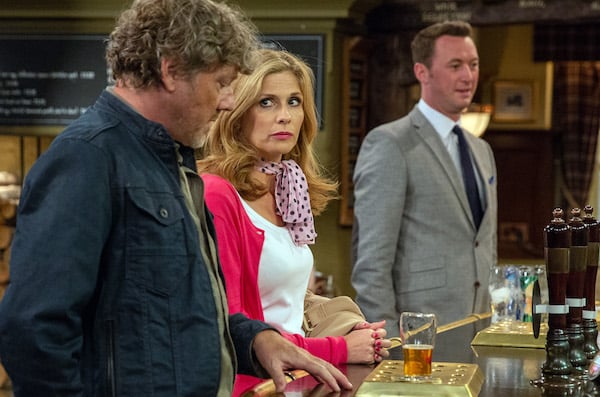 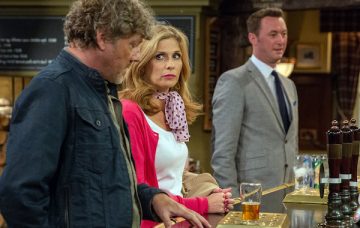 Bernice finds herself attracted to another man. Could it all be over for her and Daz?

It’s not a great week for Bernice and Daz in Emmerdale next week as Bernice finds herself attracted to village GP, Liam Cavanagh.

It comes after the beautician is given a huge fright when her dad Rodney collapses following his girlfriend Misty leaving him for a job in Thailand.

Daz is then left hurt when Bernice says she can’t come to court with him and the next day he does his best to find himself a job.

He succeeds but it’s not the kind of job Bernice is too impressed with.

She’s mortified when she discovers he’s got a job as a clown and arrives in full fancy dress.

Could this be the end of the line for their relationship?

The pair have been under strain since Daz was accused of abducting his own daughter Amelia earlier this summer.

It turned out that Daz was innocent and Amelia was actually being held by Beth, a young girl who blamed Daz for her dad’s death.

Daz emotionally confessed to his brother Dan that he’d killed someone accidentally while he was in the army.

Beth posed online as Daz to lead the police to him, while brainwashing Amelia into thinking her family didn’t care about her.

The schoolgirl was easily led as she’d just lost her mum, Ali, and discovered that Daz was her biological father and not Dan as she’d grown up believing.

Viewers were left fearing for 11-year-old Amelia’s safety as Beth revealed she has a dark side.

Amelia turned to her new friend after discovering her ‘uncle’ Daz is really her biological dad.

While the two girls seemed to be friendly, it later became obvious that Beth had an ulterior motive and was manipulating Amelia into rejecting her family.

She has also convinced Amelia that no one was looking for her.

Last week however Beth came good and convinced Amelia not to run away with her to Scotland before she was sentenced to nine months in juvenile detention for holding Amelia hostage.

Should Bernice dump Daz? Leave us a comment on our Facebook page @EntertainmentDailyFix and let us know what you think!