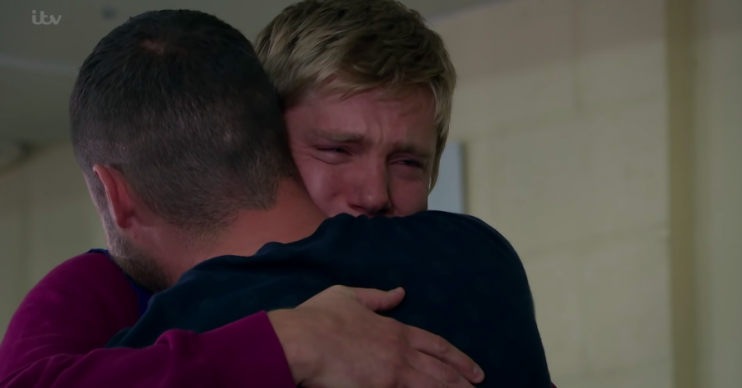 Robert decided to end his marriage without telling his husband

Fans of Emmerdale have been left in tears after Robert Sugden secretly ended his marriage to Aaron Dingle while in prison.

The murderer was sentenced to 14 years minimum in jail for the killing of rapist Lee Posner.

And last night he was told he was being moved to a prison miles away where his family couldn’t easily visit him so he decided to split for good during his last visit in Yorkshire.

Handing over his wedding ring Robert let Aaron believe he had given it to him to avoid it being stolen in prison.

“I’ll keep it safe for you,” Aaron told him unaware he wouldn’t be seeing his husband again.

Read more: Emmerdale fans HATE Jacob and Leanna pairing after they kiss and want Jacob to be with Liv

Viewers watched in tears as Robert was told he was being transferred to a prison on the Isle of Wight, miles away from his friends and family.

But instead of letting them travel all that way or putting in for another transfer, Robert decided it was best to secretly end his marriage.

On his last visit with Aaron, Robert didn’t tell him about the transfer.

Instead he broke down in tears and said: “I love you so so much. You’re the best thing that ever happened to me. Promise me you’ll never forget. Goodbye Aaron.”

A confused Aaron insisted he would see Robert soon, but that won’t happen, with Robert instead going to wait until he has been transferred and then deny Aaron any visits.

Making it worse, a compilation of flashback moments between the couple known as Robron played over the goodbyes.

It left viewers as emotional wrecks at the scenes.

One said: “Why did I have to do that go downstairs to see Robert saying goodbye to Aaron. That flashback killed me I’m now a emotional wreck”

A second said: “Well thank you very much #Emmerdale that #Robron montage has me crying like a baby.”

Another added: “THAT MONTAGE AT THE END IM BROKEN.”

What did you make of Robert’s goodbye? Leave us a comment on our Facebook page @EntertainmentDailyFix and let us know what you think!