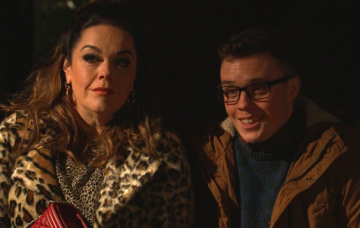 She's back and she's got a whopper of a secret

Mandy Dingle has delighted Emmerdale fans by making a surprise early return to the soap.

Man-eater Mandy turned up at the Dingle farm at the end of last night’s episode with her teenage son Vinny with her in a shock move.

Fans hadn’t expected to see her until next week and couldn’t hold back their joy on Twitter when she arrived.

One tweeted: “Fantastic so glad Mandy is back, Emmerdales about to get better.”

Another added: “MANDY DINGLE IS BACK!! @Reallisariley looking A Maze Zing. Can’t wait to see how this plays out. @emmerdale at its best #MandyDingle”

In her comeback scene Mandy didn’t reveal her true reason for returning, instead jumping on the suggestion she was back for Marlon’s wedding.

And actress Lisa Riley has revealed there is a big reason for that.

She confirmed Mandy isn’t back for the wedding and is hiding a huge whopper of a secret from her ex, Paddy, and family.

Asked about the wedding she said: “No, she hasn’t been invited! I can’t tell you why she’s back, but it’s brilliant.”

Fans immediately speculated Mandy’s teenage son Vinny is her ex Paddy’s with him being around the right age for it.

But Paddy actor Dominic Brunt recently revealed Paddy doesn’t even consider Vinny could be his son.

He said: “He’s wet and dim, so it goes over his head, even after meeting Vinny. He doesn’t think anything, and I don’t know what the plans are.

“I think they [the writers] are parking it for now and don’t even know themselves.”

Lucy Pargeter added: “He’s already got a son of sorts in Aaron.

“If he had a biological son, that could have implications on his relationship with Aaron, who would he favour?

“I’m not a writer and have no idea of the plans but the opportunities are endless if it is.”

Lisa also revealed her return is just a short one for now, but the door has been left opened for a future return.

How do you feel about Mandy’s return? Leave us a comment on our Facebook page @EntertainmentDailyFix and let us know what you think!