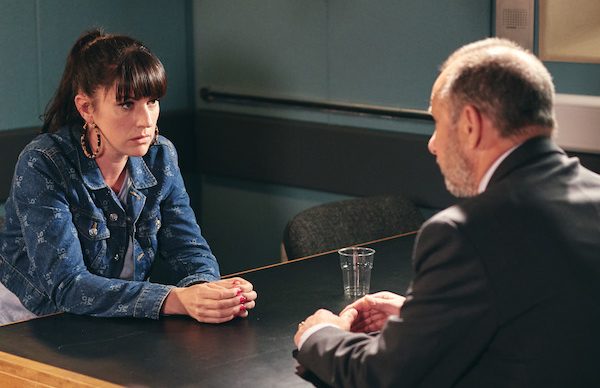 Smearing the name of a dead man? That's low!

Kerry Wyatt has done the unthinkable in the eyes of Emmerdale fans, by attempting to blame Frank Clayton for the fire that killed him.

Viewers were horrified during Tuesday night’s visit to the Dales (August 6), when Kerry was questioned by the police and tried to implicate Frank in the crime to save her own skin.

Well, the dead can’t talk… Or defend themselves in this case.

As if Kerry hadn’t already lost any fans she had after robbing the factory in the first place and inadvertently causing the fire, there’s now no one left on her side after her latest desperate actions.

Viewers know that Kerry and her daughter Amy are responsible for the fire which lead to the tragic death of Frank Clayton.

While stealing the Wild West charity event money from the Sharma & Sharma sweet factory’s safe, they also caused the fire which left many of the village residents in serious danger.

When Kerry was called in for questioning by the police, the twisted firestarter had to think on her feet – and chose a heinous path to take. By blaming Frank!

When she accidentally mentioned that she saw Tracy Metcalfe going into the factory, the detective inspector was quick to pick her up on it.

He said: “How did you know Tracy Metcalfe was inside the factory after the fire had started?”

Stuck between a rock and a hard place, and desperate not to implicate herself, Kerry quickly covered her tracks.

The factory worker told the persistent policeman that Tracy had gone inside the factory to find her dad – who was stealing the money from the safe!

Viewers know that Frank was a former convict, meaning perhaps that Kerry’s story might be easy to believe.

But those watching from home were disgusted that Kerry had tarnished the name of a dead man, who couldn’t defend himself from the grave.

Agree Amy, Kerry is disgusting but if you don’t go to the police now, you are just as bad #emmerdale

Wow Kerry! Never knew you could sink so low!!!😡#Emmerdale

Poor Frank, he’ll be turning in his grave..😳 #emmerdale

Wow that's low Kerry framing a dead man the man you killed because of you're actions.. 😡 #Emmerdale

Kerry's been deplorable tonight. If they do try and redeem her it'll be a hard sell #Emmerdale

Kerry is absolutely vile. She needs to go now.
Fed up of her getting away with everything #emmerdale

lock her up officer #emmerdale

Kerry, my love. What on earth are you playing at? #emmerdale pic.twitter.com/IJ7i1qrZws

One fumed: “Wow that’s low Kerry, framing a dead man – the man you killed because of your actions.”

Another said: “Poor Frank will be turning in his grave.”

“Anyone gone off Kerry? What a cow!” blasted one more, while another said Kerry’s actions were making “their stomach turn”.

Others called her “disgusting”, “vile” and “deplorable”.

After Kerry was cautioned by the police and released, even her own daughter Amy was horrified, disowning her and telling her she wanted nothing more to do with her.

Amy blasted: “We killed him and now you’re slagging him off? Lying to the police about him?”

Kerry replied: “I had to throw them off the scent, otherwise they’d be looking at us. I had no choice. I didn’t want to. But Frank… it can’t hurt him, now can it?”

Oof, tell that to his grieving daughters Kerry!

Do you think Kerry can ever redeem herself after this? Leave us a comment on our Facebook page @EntertainmentDailyFix and let us know what you think!