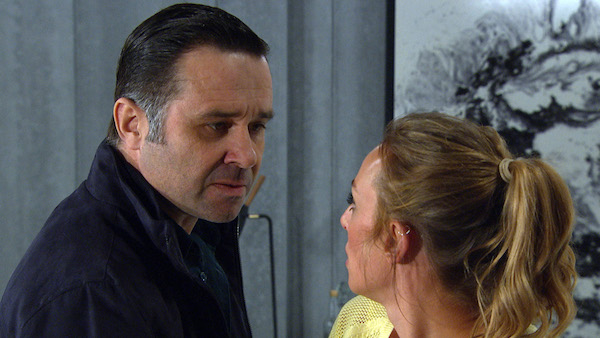 The henchman was brooding with a capital B

Fans of Emmerdale applauded the soap’s “brilliant twist” last night, as Graham Foster returned to the village and looked furious to see Andrea Tate settled in.

On Tuesday (June 11), brooding henchman Graham revealed he already knew Jamie’s wife – blowing her secret identity out of the water.

And while Andrea looked horrified to encounter Graham again, fans were thrilled to have Kim’s right hand man back in town.

Read more: Emmerdale SPOILER: Victoria in trouble with the police

As soon as Graham walked back through the door of Home Farm, after an extended period away, a storm cloud crossed his (rather handsome) face and he grabbed Andrea’s arm.

Demanding to know what she was doing there, it became immediately clear to shocked viewers that Graham and Andrea have history.

The horrible truth eventually spilled out, that Graham – acting on Kim’s behalf, but without her knowing – had paid Andrea to seduce Jamie and spy on him a few years ago.

However, after developing romantic feelings for Jamie, she stopped reporting back to Graham and pursued a relationship with Jamie instead.

Graham now believes Andrea is a gold-digger who only wants Jamie’s fortune.

Will Jamie learn the truth about his now wife?

If Kim has anything to say about it, Jamie will be finding out sooner rather than later, after issuing Andrea with an ultimatum to tell Jamie the truth… Or she will.

While many of those watching from home were delighted with the dramatic storyline, others were just happy to have Graham back on their tellies.

One fan simply wrote: “Yay Graham is back.”

Another added: “Graham filled the door frame nicely! Love him in casual gear. So good to hear his voice, missed him loads.”

A third gushed: “I can’t help but look at Graham and see him in a James Bond film. Evil Villian or as Bond himself, sign him up! #Emmerdale.”

“Graham rocks,” declared another, while one more said: “Phwooar.”

@andrewscarboro yay Graham is back

I can’t help but look at Graham (@andrewscarboro) and see him in a James Bond film. Evil Villian or as bond himself, sign him up! 😍 #Emmerdale

Graham's back and looking more evil than ever #emmerdale

Others praised the ITV soap for the unexpected rollercoaster ride, with one saying: “Emmerdale has been brilliant tonight. […] What a twist with Andrea and Graham.”

Another said: “So Graham hires Andrea? Not a bad twist. Certainly makes her more interesting than before #Emmerdale.”

A third typed: “I knew Andrea being Jamie’s wife was not straightforward. Now I am so excited to know what her and Graham’s history is.”

“Absolutely fabulous episodes tonight. Graham’s at Home Farm, Kim going into battle… Good job she wasn’t on horseback when she discovered the truth, they’d be in Hotten General by now. Brilliant! More of the same please,” enthused one satisfied viewer.

So Graham hires Andrea? Not a bad twist. Certainly makes her more interested than before #Emmerdale

I knew Andrea being Jamie Wife was not straight forward now I so excited to know what her and Graham's history is. #Emmerdale

Absolutely Fabulous episodes tonight. Graham’s at HomeFarm, Kim going into battle, good job she wasn’t on horseback when she discovered the truth, they’d be in Hotten General by now. Brilliant more of the same please.

Dozens of Emmerdale fans are also convinced that Andrea and Graham had an affair in the past, and that Millie may even be HIS daughter.

Andrea arrived in the village last week with her and husband Jamie Tate’s young daughter Millie.

Are you enjoying the Graham/Tate storyline? Leave us a comment on our Facebook page @EntertainmentDailyFix and let us know what you think!