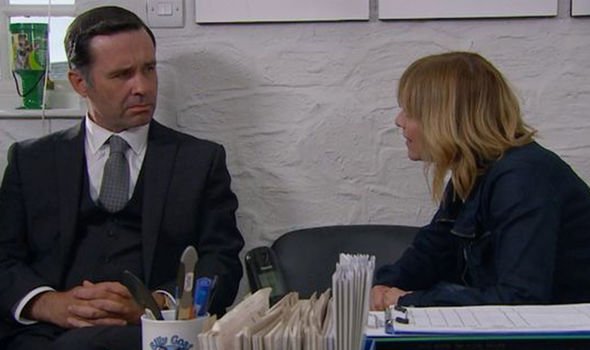 Some viewers think they'd make a good couple - do you agree?

Graham Foster and Rhona Goskirk had a surprising heart-to-heart in last night’s visit to Emmerdale, and some fans believe there was “chemistry” in the air.

On Thursday night (July 25), Graham and Rhona found they had a lot in common as they discussed Kim Tate and her toxic influence on the village.

In the latest double-bill of the ITV soap, Kim was seen confronting her son Jamie Tate over his betrayal.

He and Rhona, as well as others working at the vets, had plotted to get Kim out of their lives for good.

Viewers saw Jamie pretend that Rhona was treating him badly in the hope that Kim would sign over her share of the vets to him, making him and Rhona partners.

Read more: Emmerdale fans accuse soap of ‘having it in for’ Moira Dingle

However, after discovering their plan to oust her from the business, she sent trusty sidekick Graham to the vets to steal some ketamine and plant it in the kids playground to get the vets in trouble…

Kim, keen to make the most of Vanessa’s history, thought this little incident would tarnish the reputation of the business.

When Graham was discovered at the vets, Rhona locked him in and demanded an explanation, and he confessed the truth.

As Rhona encouraged Graham to break away from the villain, the chat struck a chord with Kim’s gopher, whose loyalties have been divided ever since his master and lover returned to the village.

She told him: “You don’t have to stay with her. Whatever thing it is you’ve got going on and whatever twisted loyalty you have, you’re obviously not happy.

“In my experience, staying with someone under obligation is never a good idea.”

However, a morose Graham replied: “It’s not just something I can walk away from.”

As the pair enjoyed a bonding session, Rhona said: “Graham, you only get one life. Please don’t waste it paying lip service to someone like Kim Tate.”

And some of those watching from home firmly believed they saw a spark between the pair.

One wrote: “OMG please get Rhona and Graham together as a couple. Wow, best character chemistry I’ve seen. Totally shipping them, a little worried about Kim Tate finding out – she’s gonna flip.”

Another said: “I think Graham and Rhona could be a good couple. Interesting how Graham’s been talking about Joe again.”

Aww was just going to say love Rhona and Graham heart to heart beat me to it, maybe start of a beautiful new relationship?!

Why am I shipping Graham and Rhona? 🙃 #Emmerdale

@emmerdale any chance of Rhona and Graham getting together #emmerdale

A third typed: “Not going to lie and probably an unpopular opinion, but I wouldn’t object to Rhona and Graham being a couple…”

“After tonight I have NO doubts,” enthused one more. “Rhona became animated and Graham opened up spontaneously and told her about the darkest days of his past. Maybe because they both have addiction issues they have a common understanding?”

Another added: “The chemistry between Rhona and Graham. That has leapt out without warning.”

In fact, dozens of fans noticed the “chemistry” and predict a future alliance between the pair, be it sexual or platonic.

Do you believe Graham and Rhona would make a good couple? Leave us a comment on our Facebook page @EntertainmentDailyFix and let us know what you think!