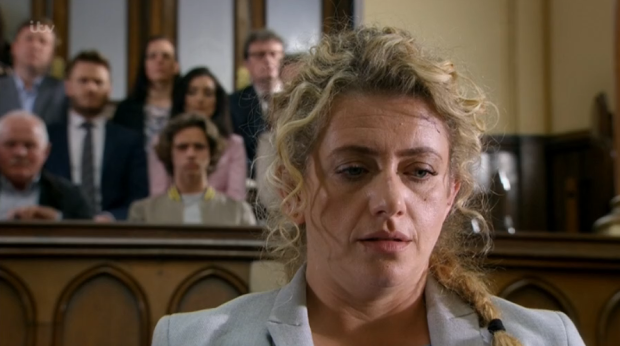 She has been sentenced to 12 months in prison

Maya Stepney is probably wearing her striped prison overalls right now, starring at the bricked cell which will be her home for the next few months.

And Emmerdale viewers believe she’s plotting her revenge… To return to the village and convince Jacob Gallagher to run away with her.

In tense scenes on Thursday (June 20), groomer Maya finally faced judgement in court and was found guilty of having an inappropriate relationship with schoolboy Jacob.

After a year of grooming Jacob, which eventually ended in the pair having a sexual relationship, Maya was sentenced to 12 months in jail – a verdict which left viewers disappointed.

Maya, played by Louisa Clein, was given a lighter sentence after having the abuse charges reduced down to sexual contact with a minor due to the explicit texts they exchanged.

Read more: Emmerdale fans predict Nate has a vendetta against Cain because they are father and son!

The judge told her: “You Maya Stepney, a person aged 18 or over, for the purpose of obtaining sexual gratification intentionally communicated with another person, namely Jacob Gallagher, on the 15 January 2019 by way of text message.

The judge and jury believed Maya’s lies that she hadn’t had sex with Jacob, but accused her of betraying her position at the school, and declared: “You betrayed your employer, your partner and the young man at the centre of this who was 15-years-old when the sexual communication took place.

“So I’m in no doubt that the custody threshold has been met. I sentence you to 12 months immediate imprisonment.”

Those watching from home now predict that Maya will be out within months – just in time for a juicy Christmas storyline!

One tweeted: “So, released five days before Christmas. Guess we know what ‘explosive’ plotline, ahem, yule have!”

Another said: “There you go, Christmas storyline is going to be Jacob running away with Maya when she’s released after half her sentence for keeping her head down in prison.”

A third added: “So Maya gets sentenced today – 20th June 2019 – and will be out on 20th December 2019 after six months. That’s the Christmas storyline sorted #Emmerdale.”

there ya go, christmas storyline is going to be Jacob running away with Maya when she's released after half her sentence for keeping her head down in prison 👍 #emmerdale

#emmerdale Maya will be out in time for the Christmas special to announce she’s pregnant. Just as Jacob and his dad reconcile. But who’s baby is it? Duh duh duh duh duh…..oh wait wrong theme tune lol

12 month?! Seriously she will be out in 6 months! Already can perceive the Christmas storyline for #Emmerdale #maya #storyline @emmerdale #feellikeimighthavewastedmytime

So, released 5 days before Christmas. Guess we know what “explosive” plotline, ahem, yule have!

Others predicted Maya would return pregnant, while some even believed she might kill herself or be back even before Christmas for the soap’s infamous ‘October week’ of dramatic episodes.

In 2017, Emmerdale’s “Week Of No Return” saw Moira Barton murder Emma Barton, while the year before saw the death of James Barton.

October is not a lucky month for the Barton family!

Emmerdale has so far not teased the storylines for October or Christmas.

In the meantime, the ITV soap HAS confirmed that actress Louisa has left the cast and we won’t be seeing her in prison.

Do you think we’ve seen the last of Maya? Leave us a comment on our Facebook page @EntertainmentDailyFix and let us know what you think!