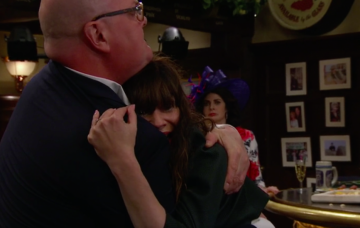 She finally gave in to her grief over baby Grace

Emmerdale fans were in tears last night as fan favourite Chas Dingle finally gave into her grief over her daughter Grace dying.

Grace was born earlier this week and Chas, along with her partner Paddy Kirk, knew the little girl wouldn’t survive for long as she had a condition which meant her kidneys didn’t develop in the womb.

The newborn passed away in her mum’s arms while Paddy dreamt of what life would be like if their daughter had lived.

Since Grace’s death Paddy and Chas’ friends and family have been growing increasingly concerned about the Woolpack landlady as she tried to throw herself into son Aaron’s wedding.

Aaron and hubby-to-be Robert Sugden offered to postpone the wedding but Chas wouldn’t hear of it, saying she needed it.

She went missing in last night’s episode and was found in the village hall putting the finishing touches to the day.

She then watched on as Robert and Aaron finally tied the knot in front of their guests.

But after the nuptials Chas gave a heartbreaking speech where she paid tribute to her ‘beautiful baby boy’ all grown up and married and to all of the good times she would make sure they had.

Later, as Robert and Aaron, drove off Chas had a panic attack and collapsed in tears in the pub.

‘She’s really gone,’ she sobbed into Paddy’s arms, the reality of their devastating loss finally sinking in.

Fans flocked to Twitter to pay tribute to actress Lucy Pargeter and to Emmerdale for handling the heart-breaking story so well.

As a mummy who lost my daughter In a very similar way, Chas's breakdown at the end brought back memories of very empty arms and broken heart. I couldn't bring myself to watch the birth of Grace but thank you for bringing the story to air.

Chas discovered that her unborn baby had a condition called bilateral renal agenisis in episodes earlier this year.

She and Paddy decided not to terminate the pregnancy but to keep their daughter with them for as long as possible.

Earlier this week Dominic Brunt who plays Paddy spoke about what was next for the couple.

He revealed to Metro.co.uk: “We knew the outcome of the birth but we didn’t want to know anymore as I like the surprise in the scripts.

“So I don’t actually don’t know what happens with Paddy and Chas next.

“I just know that they are set to struggle in their own ways for a while.”

What did you think of the wedding episode? Leave us a comment on our Facebook page @EntertainmentDailyFix and let us know what you think!