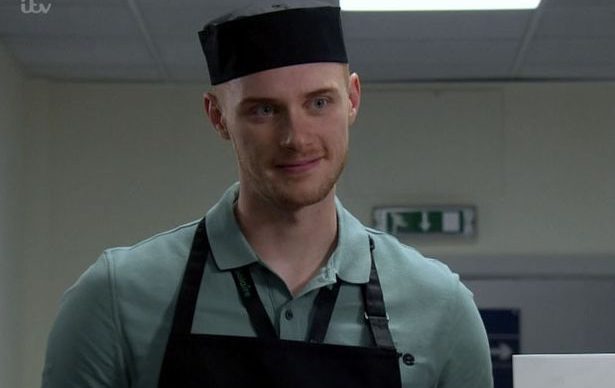 Now THAT would be a great twist!

Viewers of Emmerdale have shared a shocking theory about the real identity of Victoria Barton’s new friend Luke.

Ever since she first bumped into him at the hospital, soap fans have been divided about his intentions…

Is he a friend or relative of her rapist Lee Posner, who was also receiving treatment in the same hospital?

Or is he a good guy, who genuinely has feelings for Victoria?

The mystery man works in the hospital canteen and has shown a great interest in Victoria over the past few months.

But while some fans have accused him of being associated with Vic’s rapist Lee, some became convinced of another compelling idea when Lee died in last night’s episode (Tuesday October 15).

Vic was horrified when she saw Lee having some sort of fit, which led to him dying shortly afterwards of a bleed on the brain.

She had to break the awful news to brother Robert that he now could face charges of murder.

Fans know that Robert attacked his sister’s rapist after months of relentless goading.

He snapped, and hit the villain on the back of his head with a shovel – leaving Lee in a coma.

But some of those watching from home believe that it was LUKE who delivered the killer blow to Lee.

Writing on Twitter, one said: “This canteen guy is getting way too much screen time. He’s totally the brother of another victim who’s just gone to murder Lee in hospital and has used Vic as his alibi.

“He’s probably hanging around Vic to see if she’s in the same boat as his sister. #Emmerdale.”

Another said: “I could be barking up the wrong tree here, but something tells me Victoria’s new love interest is behind the attack on Lee!”

A third agreed, saying: “Not the attack, because we know Robert did that. But my theory is Luke had something to do with Lee’s death.

“Like they have a past together and he did something to cause the actual death. I mean pretty much the only place we see him is at the hospital.”

Could Luke in fact be a vigilante who also had beef with Lee Posner?

In May, Victoria was viciously raped by Lee and consequently fell pregnant with his baby.

Unfortunately, because she did not go directly to the police to report the sexual assault, they did not have enough evidence to prosecute.

Soon after, Lee began terrorising her – claiming she made up the attack.

After Lee’s death, Robert and Aaron made the shocking decision to go on the run to avoid a lengthy jail sentence for murder.

Viewers were devastated as the popular pair made their getaway after saying their goodbyes to their family.

Who do you think Luke is? Leave us a comment on our Facebook page @EntertainmentDailyFix and let us know what you think!