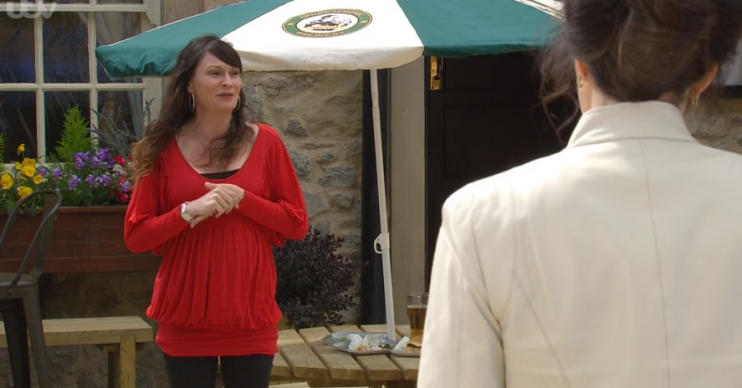 Bear guessed the sex of the baby

Fans of ITV’s Emmerdale are convinced Chas and Paddy will have a baby girl after a gender reveal blunder.

The couple were over the moon when their 20-week scan revealed that their baby was healthy.

Although they didn’t want to know they gender just yet, they asked the sonographer to write the gender down on the back of the scan photo which they left at their daughter Grace’s grave so she could keep their secret.

Last year, Chas was devastated when she found out at her 20-week scan that her baby Grace had bilateral renal agenesis, meaning she would be born without kidneys and wouldn’t survive long after birth.

Despite wanting to keep the gender a secret, Paddy’s dad Bear and Chas’s mum Faith managed to get hold of the scan photo and Bear took a look revealing to Faith they were expecting a boy.

After seeing all the whispering Chas thought Bear and Faith were having an affair behind Faith’s boyfriend Eric Pollard’s back.

When Chas confronted them in front of Eric, he revealed to Chas and Paddy they were having a boy, unaware they didn’t know.

At first they were furious at them for revealing their baby’s gender but eventually came round and were ecstatic to be having a son.

But another twist was revealed in last night’s Emmerdale, when Bear said he couldn’t read the gender properly due to his eye sight and guessed the gender of the baby.

During Paddy’s 50th birthday party, Chas announced to their guests of family and friends that they were having a boy.

Fans on Twitter think that Chas and Paddy will be having a baby girl and they will name her Lisa, after Lisa Dingle, who passed away a few weeks ago.

What's the betting that Chas and Paddy actually end up having a baby girl who they name Lisa? #Emmerdale

Bear can't read so will it turn out Chas & Paddy are having a girl not a boy ?? #Emmerdale

Chas is sooo having a girl #emmerdale

Are Chas and Paddy having a baby boy or is there a twist coming.. ? #Emmerdale

Do you think Chas and Paddy are having a boy or girl? Leave us a comment on our Facebook page @EntertainmentDailyFix and let us know what you think.