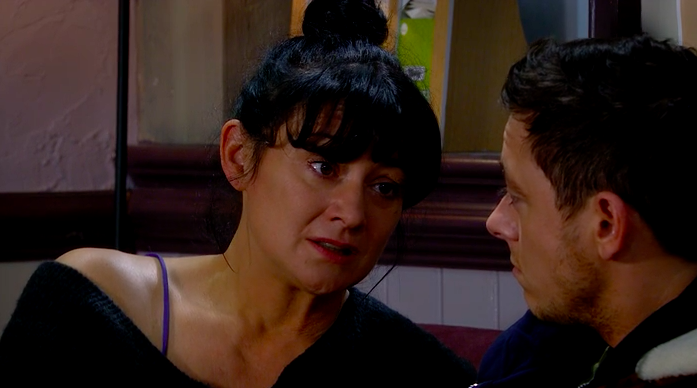 Emmerdale fans all wondering the same thing about Moira

Fans of Emmerdale are all wondering the same thing about Moira Barton as she’s about  to leave the village.

Next week the farmer will flee the village humiliated by the arrival of her estranged husband Cain’s ex Cara Robinson.

Consumed with her misery, Moira has turned to booze to cope with the breakdown of her marriage and life and has been neglecting her farm.

With her nephew Pete having left to start a rival business at Wylie’s Farm with Nate, Moira has been left single handed on the farm.

And with her decision to leave the village, fans are worried that she will leave the farm – and the animals – to rot.

One said on Digital Spy forums: “Next week Moira reveals that she will be going to stay at Nana Barton’s for a little while. But my main concern is who will be running the farm in her absence?

“No Nate/No Pete certainly no help from Cain I am a bit concerned the farm may not be able to fulfil its obligations and already The Woolpack have not had their regular order.

“Am I right to be concerned or will Matty jump to the rescue.

“It is a worrying time for the farms existence and anyone got any ideas how Moira’s absence will affect the efficient day to day running of this vital local business.”

A second agreed adding: “At Butler’s Farm, cattle to be fed and cared for, then slaughtered and made into burgers and sausages.

“Chickens to be cared for, there are horses in the stables and general maintenance on the farm.

“If Moira goes away to visit Nana Barton (would her mother-in-law want to see her?) a call to the RSPCA will be imperative.”

Another joked: “Who’s looking after the farm while Moira is [away]?”

What do you think Moira will do with the farm? Leave us a comment on our Facebook page @EntertainmentDailyFix and let us know what you think!