Viewers of Emmerdale had their hearts in their mouths last night, as Chas Dingle was forced to give birth on the floor of the Woolpack toilets.

Locked in the loos and in labour with only Marlon Dingle for support, Chas winced through her painful contractions as father-to-be Paddy waited anxiously outside. 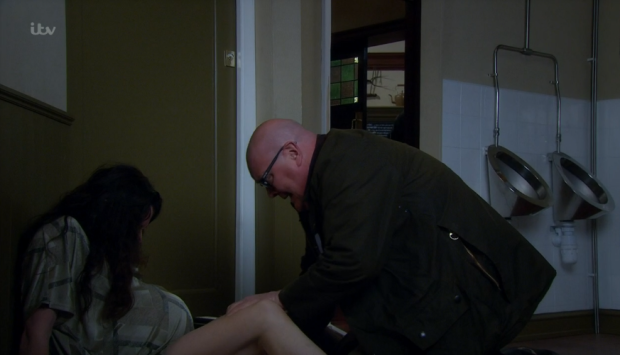 Luckily Paddy burst through the doors just in time to see the birth (Credit: ITV)

On Wednesday night (October 23), viewers saw Paddy's dad Bear do what he does best - ram the door of the toilets down just in time for Paddy to witness the birth of his son.

Or at least, that's what Chas and Paddy thought.

The couple were overwhelmed with happiness when they heard their newborn's first cries. And the scenes were made even more poignant by the fact that their daughter Grace died just over a year ago. 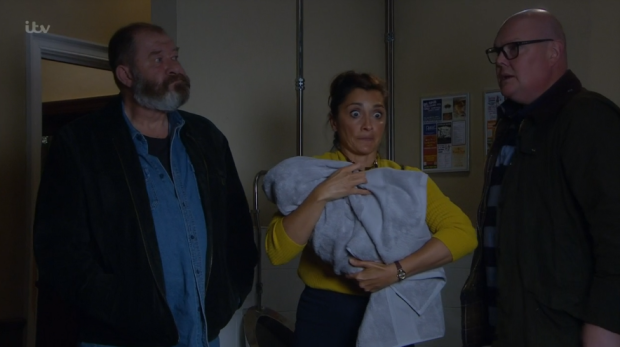 Doctor Manpreet arrived in time to give the baby the all-clear (Credit: ITV)

In the absence of the paramedics, GP Manpreet gave the baby the once over, and there was a sigh of relief when everything was okay.

But the pair were in for a shock when they discovered the baby's gender.

Emmerdale was amazing! So happy that Chas and Paddy had another girl.

After the delivery, Paddy asked: "What are we going to call him?" 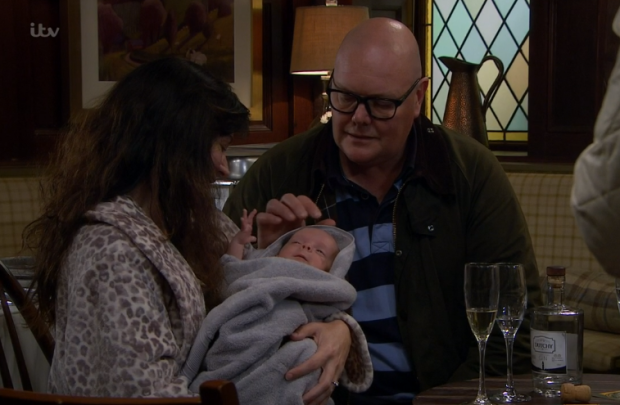 But when Chas told him to take a closer look, he soon realised he was daddy to a baby girl.

The pair had believed they were expecting a boy, but the arrival of a little girl was a bittersweet surprise.

In coming scenes, the pair will discuss names for their daughter - surely Lou?

#Emmerdale was amazing! So happy that Chas and Paddy had another girl.🧡🧡🧡🧡

Awwwww, it's a little girl. How lovely. Congratulations, Chas and Paddy ❤ @emmerdale

Was smiling away at Chas and Paddy’s baby being born and being another little girl! Had a wee tear too! Wonder if they will give her Gracie/Grace as her middle name #Emmerdale

Those watching from home were thrilled Paddy and Chas had welcomed a baby girl, with one tweeting: "I'm so happy Chas has had a girl, especially after losing Grace."

Another said: "Emmerdale was amazing! So happy that Chas and Paddy had another girl."

A third agreed, adding: "Was smiling away at Chas and Paddy's baby being born and being another little girl! Had a wee tear too! Wonder if they will give her Gracie/Grace as her middle name? #Emmerdale."

The beautiful baby will provide a much welcome distraction from Robert Sugden's impending trial, and the aftermath of Cain, Moira and Nate's boat's explosion.

Did you enjoy last night's dramatic scenes? Leave us a comment on our Facebook page @EntertainmentDailyFix and let us know what you think!