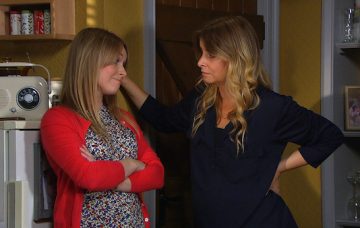 Emmerdale’s Charity and Vanessa WILL get married confirms Michelle Hardwick

It's not all over for Vanity

Vanity fans can breathe a sigh of relief for Emmerdale‘s Charity and Vanessa.

The fan favourite couple WILL get married despite their current split, actress Michelle Hardwick has confirmed.

In a new chat for the Sunday Mirror, Michelle spoke about the relationship for the couple and let slip the wedding is very much still on.

She said: “If Emmerdale weddings are anything to go by, it can’t just go smoothly, can it? I’d be very shocked if it did.”

The couple split up last week when Vanessa discovered Charity had lied to her about the casino scam and tried to buy a house without her knowledge.

After Charity swore the money she had was from hard work and wasn’t at all dodgy, the pair agreed to buy the house together.

But Vinny soon ruined their plans and kept hinting to Vanessa that Charity was involved in a scam.

Vanessa gave Charity the chance to come clean, but she didn’t.

Read more: Emmerdale’s Bob ignored by fans as they flock to Kim Tate

Furious with her fiancée for lying, Vanessa broke off their engagement, ending their relationship, as well as outing Charity’s involvement in the scam to the rest of the Dingles.

One said: “Guys I’m not ok. That was honestly soul destroying but the acting👌 but it’s so sad😭 Vanessa’s little face😭 please don’t let this be the end. 😭🙏 #vanity #emmerdale @emmerdale”.

A second said: “My heart 💔 But I’m so glad it happened this way.. they’ll come back together even stronger and I’m so glad Vanessa spoke her mind#emmerdale #vanity”.

Are you happy the couple will reunite? Leave us a comment on our Facebook page @EntertainmentDailyFix and let us know what you think!