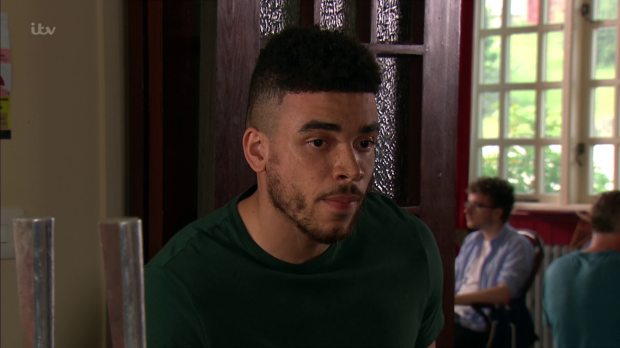 Bosses at Emmerdale have hinted they changed Nate Robinson’s identity to make his affair with Moira Barton more explosive.

Fans have long speculated about who the farmhand really is after he arrived in the village and set about seducing Moira.

Theories ranging from Cain Dingle’s son to a villain hired by Kim Tate to destroy Cain’s marriage have whipped around social media.

And now Emmerdale boss Jane Hudson has hinted that they have been listening and that Nate’s original identity has been changed to make it more exciting.

We’ve added to it, changed it and made it more exciting.

She told the Sun’s TV Mag: “This is a story we’ve been working on since last July when I joined Emmerdale.

“We’ve added to it, changed it and made it more exciting.

“There are secrets going to be revealed on the boat and our audience won’t have guessed all of them. So it’s going to be explosive in more ways than one!”

Fans have been divided over Nate since actor Jurell Carter arrived on the show six months ago.

Viewers have been appalled and sickened as the pair have hopped in and out of bed, all behind the back of Moira’s husband Cain – a very popular character with soap fans.

And playing a baddie with a secret, actor Jurell doesn’t seem to have won himself any fans!

Reacting to the news that the actor has now been nominated for a Best Newcomer Award at next year’s National Television Awards, Emmerdale’s official Twitter page said: “Our very own Jurell Carter is up for an @OfficialNTAs! Vote Jurell as your BEST NEWCOMER here…”

But fans were quick to ruin his moment, with one replying: “Sorry, but no. Didn’t like his character from the beginning.”

Another begged: “Just write him out.”

A third added: “Why? […] Give him a real storyline, one that doesn’t involve him taking his shirt off and sleeping with anyone in a bra… Then we’ll see!”

You can’t please everyone!